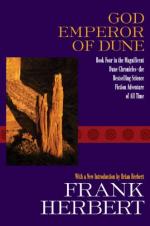 Frank Herbert
This Study Guide consists of approximately 77 pages of chapter summaries, quotes, character analysis, themes, and more - everything you need to sharpen your knowledge of God Emperor of Dune.

This detailed literature summary also contains Topics for Discussion and a Free Quiz on God Emperor of Dune by Frank Herbert.

God Emperor of Dune describes the climax of the millennia-long "Golden Path" by which Leto II Atreides sacrifices everything and tyrannically prevents the extinction of humankind.

The God Emperor Leto II is nearing the end of his anticipated 4,000-year lifespan and reign according to the "Golden Path." Siona Atreides, a beautiful rebel leader is the daughter of Leto's majordomo, Moneo. Hoping to find his vast stash of melange, she steals plans to Leto's citadel and journals that show he can be defeated through love. An undercover Fish Speaker and religious fanatic, Nayla, spies on Siona but is sworn by Leto to absolute obedience. When the current Duncan Idaho ghola attempts to kill Leto using an Ixian weapon, a new ambassador and replacement Idaho are required. Knowing only his death can restore Dune's ecology and that Siona must thereafter play a special role, Leto prepares to test her.

Tleilaxu Face Dancers botch an assassination attempt en route to the decennial "Great Sharing" in the Festival City of Onn. Flogging the Tleilaxu ambassador intensifies scattered armed resistance and the new Ixian ambassador, lovely Hwi Noree, receives a long interview that breeds envy. She reveals a mysterious past and bonds with Leto. Idaho shows interest in Noree and is ordered to avoid her. Leto grows so impassioned for Noree that he finds no consolation in his inner lives and realizes her perfection is an Ixian weapon. Idaho and Siona, whom Leto throws together, intending them to mate, insist neither is interested. Leto performs the "Siaynoq" ritual, mystically uniting the Fish Speakers with himself, among themselves, and now with Idaho, who finds the religious rituals bewildering and frustrating.

An investigation is mounted to see if Noree's mysterious past is linked with troublesome Ixian innovations, and terrorism outside the Ixian Embassy enrages a protective Leto. He reveals to Noree how his journals will set the record straight posthumously. Moneo and Idaho are dismayed by their betrothal and disgusted by the mental image of the lovers. Leto meets Siona, is angered by her defiance, and sees the weaknesses to exploit while testing her in the desert. He tries to help her survive without telling her directly how, for this would undermine the independence he needs in her. Moneo orders Noree and Idaho to end a brief, forbidden tryst, while he worries about Siona, who reaches the crisis point. She survives drinking spice-essence, sees the Golden Path, but retains her hatred of Leto. She now knows how to destroy him.

Idaho, Siona, and Nayla travel to Tuono, a Museum Fremen village at the foot of a precipice, atop which runs the Royal Road. Idaho scales the rock face and organizes an ambush for the wedding cortege. Nayla goes down in history as a Judas for shooting out the bridge's supports, sending Moneo, Leto, and Noree into the Idaho River. In his pathetic dying agony, Leto explains how Siona is now the Golden Path: she and her descendants are invisible to prescience.

More summaries and resources for teaching or studying God Emperor of Dune.