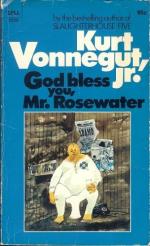 God Bless You, Mr. Rosewater, or, Pearls Before Swine Summary & Study Guide includes comprehensive information and analysis to help you understand the book. This study guide contains the following sections:

This detailed literature summary also contains Topics for Discussion and a Free Quiz on God Bless You, Mr. Rosewater, or, Pearls Before Swine by Kurt Vonnegut.

This money sets the stage for the rest of the book. It is the basis of a charitable foundation with a charter that passes the presidency from generation to generation. The only way to unseat the president is if he is found to be insane. The presidency is currently controlled by the Indiana Rosewaters and always has been, but there is another branch of the family, in the character of Fred Rosewater, in Rhode Island that doesn't know that he is a cousin of the Indiana branch.

The situation is further complicated by a shyster attorney who decides that if he can bring about a change in leadership of the Rosewater Foundation, he can claim a sizable sum as his fee. The attorney, Norman Mushari, makes it is business to learn as much as he can about the Rosewaters, since he plans on representing Fred Rosewater against the Indiana branch of the family. He works at the law firm that represents the Indiana Rosewaters. When he has enough evidence to force a sanity hearing of Eliot Rosewater, he quits the law firm and contacts Fred Rosewater.

Eliot Rosewater, the current president of the Rosewater Foundation, has always exhibited erratic and strange behavior. He finally breaks down and is confined to a mental hospital in Indianapolis, where he stays for a year without any recollection of anything that has happened. He is facing a sanity hearing brought on by Mushari. The situation wouldn't be viable if he had any heirs, so he tells his attorney to draw up papers naming every child whose mother claimed Eliot was her child's father in Rosewater County as his heirs. He thinks this will avoid the issue of removing him as the president of the Foundation.

Vonnegut's humor and satire are evident throughout the book as illustrated with Eliot's claiming the paternity of the children to avoid losing the presidency. There are also other situations of humor, such as Eliot at an opera calling out to the actors that they wouldn't waste as much oxygen if they would stop singing. There is also the plan to try to portray his life in Rosewater County as a social experiment thinking that this will help explain his strange behavior.

The book is easy and fast reading for anyone.