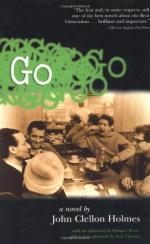 John Clellon Holmes
This Study Guide consists of approximately 43 pages of chapter summaries, quotes, character analysis, themes, and more - everything you need to sharpen your knowledge of Go.

This detailed literature summary also contains Topics for Discussion and a Free Quiz on Go: A Novel by John Clellon Holmes.

Go, by John Clellon Holmes, is the first novel published by a member of the so-called Beat Generation of the 1950s in the United States. The years immediately following World War II saw America emerge as a prosperous world power, but the Beats, whose name was derived from "beatitude" or "beatific," felt that something was missing. The devastation of the war, followed by a period of calm and order in America, created a sense of formless anxiety among young artists and thinkers. They didn't accept that the world had become perfect now that the carnage of war had somehow solved humanity's problems, and so they searched their lives for a deeper meaning. This search took the form of experimentation with drugs and sex, a fascination with the structural freedom of "modern" jazz, and a constant movement from one place to another, as if the answers these young people sought could be en route to somewhere. Indeed, Jack Kerouac's novel, On the Road, became the most famous portrayal of this generation, but Go appeared five years before Kerouac's book was published. Holmes was a friend of Kerouac and of many other prominent members of the Beat Generation.

Go revolves around a group of young friends and acquaintances living in Manhattan in the early 1950s. The men are mostly writers and poets, although the women in the book generally do not work in the arts. The main character, Paul Hobbes, is working on a novel, as is his close friend, Gene Pasternak. Hobbes is married to Kathryn, who works at a job she dislikes, and is uncertain about Pasternak and the other new friends her husband is making. Unbeknownst to her, Hobbes is writing love letters, often unsent, to a woman he met in college several years ago, whom he hasn't seen since then.

A collection of other young men and women are introduced as the novel progresses, usually at parties held in their various apartments around the city. Among them is David Stofsky, a poet who emerges as the kindest, most thoughtful person among a group that gradually reveals itself to be largely self-centered and unfocused. Each successive party among the many depicted in the novel seems to become increasingly wild, with an angry edge to it. Several characters are involved heavily in narcotics use, others are alcoholics, and still others are petty criminals. The hopefulness that seemed to hover over these young people early in the novel disintegrates even as their interactions become more and more chaotic. Nevertheless, Hobbes and Pasternak finish their novels, and Pasternak's is accepted by a publisher. The marriage between Hobbes and Kathryn falls on hard times, but they manage to weather her infidelity with Pasternak and her discovery that Hobbes has been writing love letters to someone else for three years. Stofsky becomes inadvertently involved in crimes by friends he has been trying to help. Shortly after that, another friend, the constantly drunken and abusive Bill Agatson, dies in a train accident. Hobbes finally realizes how dysfunctional this group really is, and at the novel's close, it appears that he and Kathryn will finally begin to avoid the questing yet confused and dangerous company of this group.