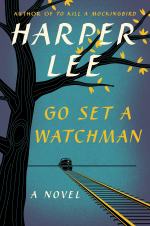 Harper Lee
This Study Guide consists of approximately 50 pages of chapter summaries, quotes, character analysis, themes, and more - everything you need to sharpen your knowledge of Go Set a Watchman.

This detailed literature summary also contains Quotes and a Free Quiz on Go Set a Watchman by Harper Lee.

Jean Louise Finch is a young woman living in New York. As the story opens, she is traveling to Maycomb, Alabama, where she plans to spend her 2-week vacation with her family. She expects to find her father, Atticus, waiting at the station but instead, Henry Clinton meets her. He is a long-time friend and an attorney in Atticus's law office. Henry believes that Jean Louise will eventually marry him and he makes it clear that he is now in a position to take care of them. Jean Louise wavers on the subject, but believes she will likely marry him at some point.

Jean Louise, nicknamed Scout, is Atticus's only surviving child. Her mother died of a heart condition when Jean Louise was a toddler. Jean Louise had a brother, Jeremy, who died very young of the same heart condition. Henry was left on his own from a young age and Atticus took an active role in his childhood. Henry joined the military and then attended college to become a lawyer. Because of Jeremy's death, Henry became the most obvious person to take over the majority of the work in Atticus's law firm. Atticus, in his early 70s, still works most days but arthritis is limiting his activities.

Atticus's sister, Alexandra, lives with Atticus and takes care of his house and his needs. His brother, Jack, is a retired doctor who lives nearby. The town is small and many things remain the same, though change is inevitable. For example, Uncle Jack confronts the song leader when he sings a traditional song a different way.

After church on her first Sunday at home, Jean Louise finds a pamphlet advocating white supremacy and calling for continued segregation of the races. Jean Louise is horrified and even more so when she finds that her Aunt Alexandra is in favor of the ideas presented. She learns that Atticus and Henry are attending a meeting about race issues and goes directly to the courthouse to find out. She sits in the balcony and watches as leaders from the region listen to a man spewing hatred against blacks. Jean Louise is very upset and avoids Atticus and Henry for the rest of the day.

Jean Louise goes to visit Calpurnia, a black woman who took care of Jean Louise and her brother for most of their childhood. Calpurnia barely acknowledges Jean Louise, leaving her to question the bond they'd shared when Jean Louise was a child. At home, Aunt Alexandra says that no white person in the county would visit a black home because of the way the blacks are treating the whites. It's the first time Jean Louise sees the true state of the relationship between the races in Maycomb County.

She plans to spend the rest of her vacation avoiding Atticus and Henry as much as possible but finds it impossible to avoid a confrontation after all. She confronts Henry who tries to justify his participation in the group by saying that he has to do whatever it takes to fit in with the community. She then confronts Atticus. He tells her that she doesn't understand the situation. He says the people of Maycomb County, and the South as a whole, have the right to decide how to handle race issues without outside interference, including from groups such as the NAACP.

That confrontation is especially painful for Jean Louise. She has spent her entire life looking up to Atticus and has always been in agreement with his ideals and opinions. When she tells him how angry she is, he says only that she has a right to feel that. That makes her even more angry and she storms away from his office. At home, she packs and plans to leave immediately but her Uncle Jack stops her. He slaps her, which forces her to slow down and consider the situation.

Once she's past the immediate anger, Jack points out that she's become prejudiced herself. He says she believes her stand is correct and that she's unwilling to consider that anyone else has a valid reason for taking any other position. Jean Louise realizes that he's right and she's horrified that she spoke so harshly to her father. Atticus tells her that he's proud of her for standing up for what she believes is right.

More summaries and resources for teaching or studying Go Set a Watchman.