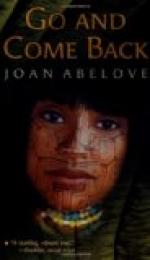 Joan Abelove
This Study Guide consists of approximately 40 pages of chapter summaries, quotes, character analysis, themes, and more - everything you need to sharpen your knowledge of Go and Come Back.

Go and Come Back Summary & Study Guide includes comprehensive information and analysis to help you understand the book. This study guide contains the following sections:

This detailed literature summary also contains Topics for Discussion on Go and Come Back by Joan Abelove.

"Go and Come Back" is a Young Adult novel by Joan Abelove. The novel is narrated by a young Isabo girl named Alicia, who lives in a small village in the Amazon jungle of Peru. Two anthropologists - who are called the "old white ladies" even though they are only in their late 20s - come to the village to study the Isabo. During their year in the village, they learn as much about themselves as they learn about the villagers. Go and Come Back is Joan Abelove's first novel.

One day two old white ladies arrive by boat in Poincushmana, a small Isabo village on the Paro River in the Amazon jungle of Peru, where Alicia lives were her family. One is tall with blond hair and is named Margarita, and the other is short and chubby like the Isabo and is named Joanna. The two white ladies are anthropologists and want to live in the village for a year to study the Isabo. Papaisi, the village headman, announces that they can stay in the village and that the village men will build them a house. The men begin work on the house the next morning, but stop as soon as the white ladies leave to pick up supplies, since no one knows if they are really coming back.

Late one night Alicia finds Carmella, the wife of a trader who often stops in the village, cradling a baby and weeping. She tells Alicia that her husband is planning to drown the infant because he believes that it is not his. Alicia takes the child to save its life. Alicia's mother thinks she is crazy and says that the baby is too skinny and will not live long but helps Alicia care for it, as do the rest of the village's women. Alicia names the girl Cami.

The two old white ladies return with many boxes of supplies. The village wants to have a party to welcome them back and drink the bottle of liquor they have brought with them, but the old white ladies will only allow half to be drunk at the party because they want to save the rest and have another party when their house is finished. The villagers don't understand; they believe that if you have liquor you drink it, and if there is extra you share it. The Isabo are a communal people and share everything they have with one another. The two white ladies don't understand this and are thought of as stingy and selfish because they do not immediately share all of the supplies they have brought with the villagers.

As the weeks pass, the two white ladies give medicine and a few other things to the villagers but continue to be stingy, although Joanna does give Alicia sugar for Cami. Alicia is amazed by how ignorant the two white ladies are and sees that no one is teaching them the right way to do things. Alicia decides to help them, and starts to teach them how to be more like the Isabo. She teaches them the proper way to bathe in the river, and helps them when Margarita has a terrible stomachache by getting Papaisi to cure her. Over the next few months, Alicia forms a closer relationship with the two white ladies - particularly Joanna - and they start to act more like the Isabo, although they still make many mistakes.

One day just before the two white ladies are to go downriver and spend a few weeks in the city, Margarita finds that her watch has been stolen and becomes very angry. When the watch is returned, rather than being grateful and throwing a party, the two white ladies remain angry. Angel, the school teacher, calls a village meeting and it is decided that the two white ladies should be told not to come back. When Angel tells them this they become very upset and ask Alicia what to do. She tells them they must apologize to the village and promise not to be so stingy and selfish anymore. Alicia goes with them to every house in the village where they do what she has told them to, and they are told that they can come back.

When the white ladies return to the village they bring gifts for everyone. Alicia cannot believe the change in them. Though they still make mistakes and many of the villagers think they are silly, they are no longer as stingy as they were. When their house is finally finished they have a party, and when they find that the half bottle of liquor they were saving has been drunk and replaced with river water they do not get angry, but act as the Isabo would and make do with what they have. Later, when Christian missionaries visit the village, the two white ladies cannot believe how stingy they act, and Joanna is ashamed that she and Margarita acted so selfishly when they first came to the village. Alicia is happy that they have learned to act right, like the Isabo.

Cami becomes sick and dies, and Alicia asks Joanna to come with her to the burial. During the last couple of months the two white ladies are in the village, Joanna becomes very close to Alicia. When the time finally comes for them to go, Joanna arranges for Alicia to fly over the village in the airplane that comes to pick them up, so that Alicia can see things in a different way. After the ride is over, Alicia hugs Joanna and tells her to go and come back.

More summaries and resources for teaching or studying Go and Come Back.

Go and Come Back from Gale. ©2005-2006 Thomson Gale, a part of the Thomson Corporation. All rights reserved.