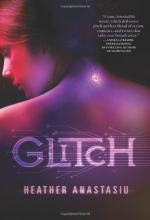 Heather Anastasiu
This Study Guide consists of approximately 28 pages of chapter summaries, quotes, character analysis, themes, and more - everything you need to sharpen your knowledge of Glitch.

This detailed literature summary also contains Quotes and a Free Quiz on Glitch by Heather Anastasiu.

Glitch, by Heather Anastasiu, takes place in a world in which an implanted chip keeps people free of emotions, both good and bad. This robotic existence ends for 17-year-old Zoe when her hardware begins to glitch, opening a world of color, beauty, and freedom. The glitch exposes her and her fellow glitchers to the dangers of not conforming.

Teenage Zoel, who secretly calls herself Zoe, lives with her mother, father, and younger brother Markan in the Community. The Community is an underground city created after the Old World was destroyed by human anger, hate, and greed. Here, all human emotions have been overridden by an implanted chip that connects residents to the Link, from which all information is imparted by the Uppers. For Zoe, everything changes when her hardware begins to glitch, enabling her to experience beauty and feelings that are foreign, yet exhilarating, to her. She works hard to hide her situation because any hint of an anomaly would lead to a mandatory repair or even deactivation. Because she feels alone and frightened, Zoe considers turning herself in; however, the idea of freedom from the Link is too enticing.

Any thought of returning to her drone-like state evaporates when Zoe meets Adrien, a young man who lives on the Surface. He is part of the Resistance, a secret movement to overthrow the Uppers and return people to freedom. Adrien begins to teach her about emotions such as love, sorrow, anger, and guilt. Her trip to the Surface is cut short when she develops severe allergies and must return to the Community with Adrien, who is on a mission to find and rescue other glitchers. Zoe soon learns that she is not alone, as her classmate Max is also a glitcher. Max wants nothing more than to be with Zoe. However, while Max is focused solely on pleasure, Zoe wants more. She shares Adrien's determination to help others escape from the clutches of the Link and experience all that true humanity has to offer. This sets her on a path of danger and intrigue where it is impossible to know whom to trust. As Zoe learns more about love, beauty, and joy, she becomes more determined not to lose the new world she has discovered.

More summaries and resources for teaching or studying Glitch.