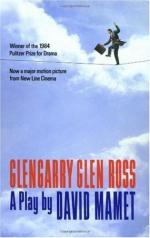 George Aaranow is a fairly stupid salesman in his fifties who seems to be sucked into Moss's scheme to steal the leads and sell them to a competitor. In Act II, Aaranow displays the only loyalty shown in the play: he keeps his mouth shut about Moss.

Baylen is a police detective in his early forties. He is in the ransacked office in Act II to investigate the burglary and, although we never see him in direct questioning, he is rough enough to outrage even the tough salesmen.

Shelly Levene is a man in his fifties, formerly a hot salesman and now down on his luck. He needs a sale to survive. In Act I, scene 1, Levene pleads with his office manager, Williamson, for good leads and agrees to bribe him but doesn't have the necessary cash. Levene is so strapped for cash that...