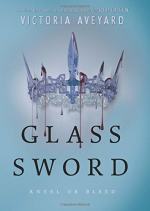 Victoria Aveyard
This Study Guide consists of approximately 64 pages of chapter summaries, quotes, character analysis, themes, and more - everything you need to sharpen your knowledge of Glass Sword.

The kingdom of Norta is divided between Red bloods, the downtrodden lower class, and Silvers, the power-hungry royalty with superhuman abilities. Mare Barrow--a Red with the Silver ability to control electricity--and Tiberius Calore--the exiled prince and rightful heir to the throne--have just escaped imprisonment by Maven, the new king. They ride on an underground train to Naercey with Captain Diana Farley and her team of Scarlet Guardsmen, an underground Red resistance. Mare’s brother Shade, another “newblood” with the power to teleport, and her childhood friend Kilorn accompany them. They fight against Maven and a Silver army in the ruined city. Mare realizes that the Scarlet Guard is much more extensive than she had assumed. They narrowly escape to a submarine, called a Mersive, and they depart for a remote island called Tuck.

Mare arrives on Tuck and is greeted by another of her brothers, Bree. A man with a bloody eye and an unfamiliar uniform takes Cal and imprisons him, and Mare goes to the bunkers to find her family. She has a tense reunion with her mother, father, brother Tramy, and sister Gisa. The next day, Gisa tells Mare that the man with the bloody eye and his soldiers are from Lakeland, a country warring with Norta to the North. They have joined the Scarlet Guard to overthrow Maven and are keeping Cal in the seemingly non-existent Barracks 1. Determined to find Cal, Mare goes to see Shade in the infirmary. As she talks to him and Farley, the Colonel enters and strips Farley of her command. She tells him that Mare wants to find other newbloods with the aid of “the list” – a notebook of names given to Mare by Silver-blooded Julian Jacos. The Colonel denies the request and leaves, and Farley gives Mare the key to Barracks 1.

Kilorn agrees to help Mare find Cal and they enter Barracks 1 through a moon pool under the surface of the ocean. They see a family picture of the Colonel with Farley, but continue before exploring further. They find Cal in his cell, surrounded by Silent Stone – a stone with the power to “silence” Silver abilities. While Mare tries to free Cal, the Colonel and several soldiers Kilorn locks Mare in the cell with Cal. Betrayed, Mare and Cal discuss plans to escape the cell until the Colonel returns with Kilorn and Farley. Kilorn injects Farley with a sedating drug before placing her in a cell of her own, then enters Mare’s cell with the Colonel. The Colonel tells them that he is going to return Cal to Maven, but before he finishes, Kilorn knocks him out. Shade teleports into the cell and they escape to the surface with Farley, who is unaffected by the drug.

Farley, Shade, Cal, Kilorn, and Mare steal a large jet called a Blackrun from the Tuck hangar and escape the island. They fly to Coraunt to rescue the first of the newbloods – Nix Marsten. Nix joins them, but threatens Cal, blaming him for the death of his daughters. They fly to Harbor Bay next and meet up with a smuggler named Crance. Crance leads them through the tunnels below the city before revealing that he plans on betraying them for a bounty. Mare uses her power to collapse the tunnel, killing Crance’s accomplices. Crance escapes with her, Farley, Shade, and Cal, and promises to help them. They walk to the Security Center, losing Shade and Crance to a gang fight. Farley, Cal, and Mare break in and collect information and addresses for the rest of the newbloods in the list before escaping and continuing to find their next rescue. They find the newblood dead, hung from a statue. Before they can remove his body or leave, Maven ambushes them again, using a sounder device to block Mare’s abilities and branding her with his fire. Mare goes unconscious.

Mare wakes up in a small safe house called the Notch, hidden far in the wilderness, four days later. She continues to rescue newbloods over the following weeks using the Blackrun, and Cal trains them at the camp. During a rescue in Templyn, Mare and her team find a dead infant with a note from Maven attached, demanding that Mare returns to him. Mare keeps the note a secret and begins to sleep in Cal’s quarters. Another newblood notifies her that they discovered a military order to send 5,000 children to death in “The Choke”. Mare decides that rescuing newbloods must remain their mission, and they continue to Pitarus the next day. While they walk through Rosen to their destination, they meet a newblood named Jon with the ability to see the future. He tells them about a prison where many newbloods and Silver dissenters are being kept, and Mare decides to trust him. They plan to raid Corros Prison three days later, after stopping at a lake to find a tool by Jon’s suggestion.

Mare follows Jon’s advice and goes to the Lake. She finds Cameron Cole, a young newblood with the ability to silence Silver powers. Cameron does not want to join Mare and instead wants to save the soldiers at the Choke. Mare brings her to the Notch against her will. Cameron explains the layout of the prison to the others at the Notch and tries to convince them to go to the Choke instead. Many at the camp choose to follow Mare. Three days later, Mare, Cal, Kilorn, Shade, Farley, Cameron, and several newbloods fly to Corros. With the help of Nanny, who can impersonate Maven, they enter the prison and release the prisoners, including Julian and Sara Skonos, a Silver healer. As they escape, Shade jumps in front of Mare to protect her from an incoming projectile and dies. Mare kills Queen Elara with her lightning.

Mare and the survivors of the raid return to Tuck. She shows the Colonel Queen Elara’s body and he agrees to harbor the newbloods. They record a message to the Kingdom that reveals Maven’s deception and shows Elara's dead body. Mare meets Rash and Tahir, two newbloods, or Ardents, from a distant nation called the Republic of Montfort. They offer the newbloods safe haven in exchange for her military leadership and she declines. As her message broadcasts across Norta, Mare and several volunteers fly for the Choke to rescue the child soldiers. The plane is shot down by Maven and the Silver army and Mare is captures. She is taken to Archeon where Maven puts a collar on her in front of a crowd of Silvers.

More summaries and resources for teaching or studying Glass Sword.