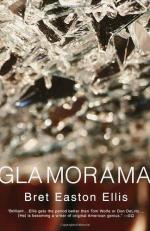 This detailed literature summary also contains Topics for Discussion and a Free Quiz on Glamorama: A Novel by Bret Easton Ellis.

Victor Johnson, who uses the name of Victor Ward, is a model and the son of a United States Senator who has presidential aspirations. Victor is a part of the world of fashion modeling and is an aspiring actor. He dates supermodel Chloe Byrnes and his life consists of modeling assignments and partying at night. It's all about being seen and photographed with the right people.

The book opens with Victor running the opening of a new club for Damien Ross. Damien is engaged to Allison Poole, who is financing the club. He is also keeping Lauren Hynde as his mistress. Victor becomes involved with both women and also plans to open his own club in several months. Damien hears rumors about all of this.

As Victor moves around Manhattan, he finds himself being followed by black jeeps, which he keeps evading. When he meets with a supposed disk jockey for the opening of the club, he finds that the man is F. Fred Palakon, who offers him three hundred thousand dollars plus expenses to go to Europe to bring and old college girlfriend, Jamie Fields, back to the United States.

After the club opening, everything falls apart for Victor. Damien's thugs grab him and rough him up and Damien fires him. Damien breaks up with Allison and leaves for Miami with Lauren. Chloe is packing to leave and tells Victor that he isn't interested in a relationship and keeps trying to impress the wrong people. Since he has nothing else going for him, Victor sails to London, as per Palakon's instructions, taking along the hat that Lauren gave him. He doesn't know what he is getting into. Jamie Fields is part of a terrorist organization run by former model Bobby Hughes. Victor is trapped with them and is set up for the murder of Sam Ho and others. The terrorists are part of the high fashion and jet set crowd and Victor is a part of several bombings in Paris.

Then Victor finds out that Palakon is a double crosser who plays both sides. His father apparently wanted him out of the United States so he wouldn't prove an embarrassment to his presidential campaign.

Victor finds that the people around him aren't who or what they say they are in this book of intriguing conspiracies and international terrorism, with film crews following the characters around. The end of the book can be given several different interpretations by the reader who will enjoy this unique book. The novel is more than five hundred pages, but is very interesting reading and will hold the reader's interest.