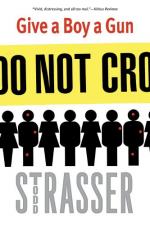 Give a Boy a Gun Summary & Study Guide

Give a Boy a Gun Summary & Study Guide Description

Give a Boy a Gun Summary & Study Guide includes comprehensive information and analysis to help you understand the book. This study guide contains the following sections:

This detailed literature summary also contains Topics for Discussion on Give a Boy a Gun by Todd Strasser.

Give a Boy a Gun is a novel by author Todd Strasser. In this novel, Brendan Lawlor and Gary Searle are two boys that attend Middletown High School. Brendan Lawlor moves to Middletown from Springfield in the middle of his ninth grade year. While Brendan was a jock and popular in his previous school, his life changed when he came to a new town and a new school. Brendan becomes friends with Gary Searle, who is also an outcast at Middletown High School. Brendan finds himself struggling beside Gary with the other kids at school teasing them, making fun of them, and treating them as outcasts. As the boys continue through high school, the divide between them and the popular kids widens. For the next few years, Brendan and Gary continue to deal with the daily torments inflicted upon them by other kids at school, especially the athletes, such as the football players and the wrestlers. Give a Boy a Gun is a novel that questions who is to blame for the school shootings that plague the high schools across the country. Is the fault of the gun manufacturers, parents, kids, violent video games and movies or something else that is pushing kids to turn to killing their tormentors at school, and even turning the gun on themselves to stop the pain and the torment they felt their classmates were inflicting upon them.

One night, when the school dance is taking place, Gary and Brendan enter the gym with masks covering their faces, armed with bombs and guns. Gary and Brendan force all of the students and teachers to lay face down on the gym floor. While Gary and Brendan are yelling instructions at the students, they are also firing shot into the air. They separate the boys from the girls and then zip tie the hands of the boys behind their backs. The boys focus their torment on one particular athlete, Sam Flach, by shooting him on both of his knees. Brendan also shoots one of the teachers in the chest to prevent him from using his walkie-talkie to call in teachers as reinforcements or to call the police. The boys plan to torment their tormentors, kills everyone in the gym and them turn the guns on themselves to end their own lives and own pain.

Brendan and Gary's plans do not turn out quite as they thought. First, Allison, which is Gary's on and off again girlfriend, who is not supposed to be at the school dance ends up showing up because she has a bad feeling that Brendan and Gary are up to something. When Gary finds out that Allison is in the gym, Brendan and Gary start to argue about carrying out the plan. Since the plan is to kill everyone and then commit suicide, Gary hesitates because he has no intentions on killing Allison.

The police drop a mike and camera through the ceiling of the gym. While a professional negotiator tries to talk the boys out of carrying out their plan, the police also have the boys' parents try to talk them out of carrying out the plan. While the boys argue, Allison removes her belt from her pants and goes over to Sam Flach to try to stop the bleeding on one of his legs. When Allison goes to retrieve a belt from one of the other boys, she sees his hands are free from the ties. The same boy also has a pair of nail clippers to cut the ties off another one of the boys. Allison simply moves on to get a belt from another boy and applies the belt to Sam's other leg to stop the bleeding. At the same time that Allison is trying to save Sam's life, Gary shoots himself.

Simultaneously, the boy with his hands untied clips the ties off another boy and they tackle Brendan. One of the boys holds Brendan down, while the other boy frees the hands of the other boys. At least a half a dozen boys attack Brendan, kicking him repeatedly in the head—causing him to lapse into a coma and causing brain damage.

The entire novel is a recount of the stories of the survivors. Each person tells the stories that revealed the signs that Gary and Brendan presented as a warning that a school shooting or some kind of revenge on their schoolmates was a plan in progress. Others that were victims of the shooting question the causes that would send these boys into a shooting rampage. It is a question of gun control, home influences, student interactions, societal expectations ,and other factors, and how all of these aspects affect the way that people, especially teenagers, react to stressful situations.

Give a Boy a Gun from BookRags. (c)2022 BookRags, Inc. All rights reserved.