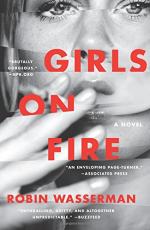 Robin Wasserman
This Study Guide consists of approximately 55 pages of chapter summaries, quotes, character analysis, themes, and more - everything you need to sharpen your knowledge of Girls on Fire.

Girls on Fire: A Novel Summary & Study Guide includes comprehensive information and analysis to help you understand the book. This study guide contains the following sections:

This detailed literature summary also contains Quotes and a Free Quiz on Girls on Fire: A Novel by Robin Wasserman.

The following version of this book was used to create this study guide: Wasserman, Robin. Girls on Fire. New York: Harper Collins, 2017. Print.

The novel starts with a prologue set in the present. It briefly ruminates on modern girlhood, and the next chapter begins in 1991. Hannah Dexter, a junior in high school, narrates the first chapter. Craig Ellison, a classmate of hers, was found dead in the woods, the victim of a tragic suicide. The people of Battle Creek suspected that Satanism might have had something to do with his death.

The most popular girl at school was Craig’s girlfriend, Nikki Drummond. She made fun of Hannah for having blood on her white gym shorts, and Hannah ran away crying. Hannah met the new girl who had moved to town over the summer, Lacey, who consoled her. Lacey then gave Hannah a new name, Dex. They skipped school to go to a lake and listen to Nirvana, which was Lacey’s favorite band. The next chapter is told from Lacey’s perspective, revealing she has had an extremely rough upbringing.

The girls started hanging out after school at Dex’s house, getting drunk and listening to music. One day Dex’s father caught them, but instead of getting angry he chatted with Lacey about the Ramones and his old band. Lacey came over for dinner and continued to get along a little too well with Dex’s father. Dex insisted that they start spending time at Lacey’s house, so they had a slumber party.

Dex was shocked to find that Lacey’s mother was drunk and that Lacey and her mother speak to one another casually. In the middle of the night, Dex left Lacey’s room and saw Lacey’s stepfather abusing her mother. The girls ran out of the house and went to the lake again. They seemed to be the best of friends, but in one of Lacey’s chapters, she revealed that she had a secret relationship with Nikki and Craig that Dex did not know about.

Lacey began to secretly see Dex’s father behind Dex’s back. The two talked about music and flirted, but Lacey remained adamant that their relationship was not sexual.

As their friendship grew, the girls took mushrooms and went to a church service, then sacrificed a cow in a satanic ritual. Lacey was obsessed with Satanism, not because she really believed in it, but because she wanted to shock people. They got fake IDs, went to clubs, and made out with boys. They broke into the cemetery to build a Satanic shrine. They graffitied a Teen Pregnancy Center. Dex’s mother found out about the graffiti, because Nikki told her, and she grounded Dex.

Dex and Lacey got into a fight because Dex thought that Lacey only cared about herself, but they agreed to meet at Nikki’s party to get revenge. Lacey was late because her stepfather found her Satanic Bible and proceeded to burn all of her possessions. Dex thought that Lacey had abandoned her, so she went to the party on her own and got drunk. When Lacey finally showed up, Dex refused to leave with her, so Lacey left her alone.

Lacey went back home and her parents sent her away to Horizons, a Christian boot camp. Dex stayed at the party, passed out, and woke up in the yard with the garbage. Her skin was covered with horrible words that people from the party had written on her.

Dex thought that Lacey had abandoned her for Seattle, so she stayed in her room depressed until Nikki came by to check on her and invite her to a pool party. Dex was hesitant at first, but soon she became friends with Nikki. Nikki, without being obvious, began to plant seeds of doubt in Dex’s head about Lacey. Dex began to suspect that Lacey was a horrible person and friend. Meanwhile, Lacey was at Horizons trying to get out. She finally decided to stop trying to be good and follow all of their rules, and started pretending to be a real Satanist. Some of the girls kidnapped her, tied her up in the woods, and assaulted her. The next day, Horizons agreed to send Lacey home as long as she would sign a paper agreeing that nothing had happened to her.

When Lacey came home, Dex was not ready to forgive her and become friends again. Lacey was hurt, so she struck up her old relationship with Dex’s father. They hung out together at the movie theater where he worked and smoked cigarettes. One day, Nikki saw them together, and so she took Dex there to see them for herself. Dex was upset, so she went to the woods with Nikki, got drunk, and kissed her.

That night, Dex and Lacey both went to their spot at the lake, and Lacey warned Dex that Nikki’s intentions were impure. In one of Lacey’s chapters, it is revealed that she had a sexual relationship with Nikki and Craig, and she feared Nikki was going to use Dex to hurt her.

When Nikki found out that Lacey and Dex had spoken, she was furious, and so she invited Dex over to her house for a slumber party. When Dex got there, she saw a video playing in which Nikki coerced her male friends into sexually assaulting Dex’s unconscious body. Dex was shocked and betrayed.

When Nikki tried to apologize, Dex got a knife and lured her into the woods and locked her up in an old boxcar. She left to get Lacey, and the two of them tortured Nikki into confessing to everything bad she had ever done. Then Nikki revealed to Dex that she and Lacey had a sexual relationship. Lacey told Dex that she had shot Craig on accident when all three of them had been playing a sexual game in the woods.

In order to get revenge, protect her relationship with Lacey, and create an eternal bond, Dex murdered Nikki. Dex and Lacey framed her death as a suicide, finished out their senior year, and then escaped to LA together, although it is implied that they do not live happily ever after.

More summaries and resources for teaching or studying Girls on Fire: A Novel.

Girls on Fire: A Novel from BookRags. (c)2022 BookRags, Inc. All rights reserved.