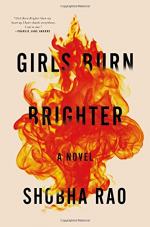 Shobha Rao
This Study Guide consists of approximately 40 pages of chapter summaries, quotes, character analysis, themes, and more - everything you need to sharpen your knowledge of Girls Burn Brighter.

Girls Burn Brighter tells the story of Poornima and Savitha, two girls from Indravalli who meet when Poornima’s father hires Savitha to work for him. The girls befriend each other and Poornima confides in Savitha as Poornima navigates her obligations leading up to her arranged marriage. When Poornima’s intended groom backs out of the marriage, she goes through the process of having another marriage arranged.

As Savitha and Poornima grow closer, Poornima’s father rapes Savitha, causing Savitha to flee Indravalli. Poornima is married off to a family who believes they are doing Poornima a favor by allowing her into their family, even though they did not receive what they believe to be a worthwhile dowry. Poornima’s husband Kishore has a deformed hand that repulses Poornima. She tries to make the best of her situation as she endures increasingly violent sexual acts and open hostility from her mother-in-law. All the while, Poornima thinks of Savitha and where Savitha has gone and how to find her. After nearly two years, Kishore and his mother are enraged that Poornima has failed to produce a child. They burn her face with hot cooking oil and send her away.

Poornima begins her slow recovery by going in search of Savitha instead of returning home. She encounters a stranger near a train platform who remembers seeing Savitha. Poornima follows the stranger to meet Guru, a man who runs a brothel. Poornima learns that Savitha worked in the brothel, but does not know the horrors Savitha experienced, including repeated rape, drug addiction, and the amputation of Savitha’s hand to make her more appealing to a Saudi man who wants to buy her. By the time Poornima begins working as an accountant for Guru at the brothel, Savitha has already been sold to a man in Seattle.

Poornima begins to scrape together money, obtain a passport, and learn English so that she can get to Seattle and see her friend. To keep Guru’s trust and show her value, she submits to sex with him and becomes a mule to get other girls being sold to other countries.

In the United States, Savitha works cleaning apartments and submitting to degrading sexual acts. She grows close with Mohan, the man who helped deliver her to Seattle. Savitha does not speak English, but decides that she must flee. With little money in her possession, Savitha begins her trip across the country. She relies on the kindness of strangers she meets, even though she cannot communicate with them. While at a gas station, two men abduct Savitha and rape her in a clearing, leaving her stranded.

Poornima makes her way to Seattle and begins her search for Savitha. She meets Mohan and they begin to search for Savitha. Knowing that Savitha has little money and cannot speak the language, they do not believe that Savitha will have gotten far. Mohan remembers telling Savitha about a place called Spearfish Canyon and thinks Savitha may have been able to get there. The novel concludes with Poornima on the other side of a door where Savitha may be.