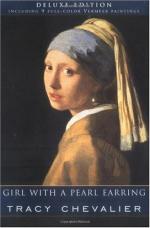 Related Topics
At the Edge of the Orchard

Tracy Chevalier
This Study Guide consists of approximately 44 pages of chapter summaries, quotes, character analysis, themes, and more - everything you need to sharpen your knowledge of Girl with a Pearl Earring.

Girl with a Pearl Earring Summary & Study Guide includes comprehensive information and analysis to help you understand the book. This study guide contains the following sections:

This detailed literature summary also contains Topics for Discussion and a Free Quiz on Girl with a Pearl Earring by Tracy Chevalier.

The Girl with a Pearl Earring is the story of Griet, a sixteen-year old girl who is hired by the famous painter, Vermeer, to clean his studio. The novel opens with Vermeer and his disheveled -wife, Catharina, visiting Griet's family to have a look at the girl they hope to hire. Griet has been cutting vegetables for the soup and has separated them by color in a wheel: turnips, carrots, leeks, red cabbage, and onion. She places the vegetables in this order because, she claims, otherwise the colors fight each other. Vermeer is intrigued by Griet's natural artistic interest and hires her on the spot. It is clear, even from this opening scene, that Vermeer and Griet have a connection and that Catharina is annoyed by it. Griet is forced into work when her father, a tile painter, loses his eyes in a kiln explosion and she needs to help her family raise money to eat. The next day, Griet travels to the Vermeer household and meets their five children, including their daughter Cornelia, a seven-year-old with a wicked streak that is immediately apparent. Griet also meets Maria Thins, Catharina's mother, and her maid, Tanneke. Throughout the first few months at the Vermeers, Griet does not see the painter again, but can sense him around every corner. Her infatuation grows every day, so that when he speaks to her for the first time, she physically begins to shake.

One of the jobs Griet is expected to perform at the Vermeer household is to buy meats from the butcher, Pieter. It becomes very apparent early on that Pieter the son, the son of the butcher, has feelings for Griet, even though she is only interested in her master, Vermeer. Griet fits in nicely to the Vermeer household, gaining complements for her work from each of the family members except Catharina and her shrewd daughter, Cornelia. Cornelia continues to create trouble for Griet, throwing her water pots into the river, breaking her favorite tile, and even stealing her tortoiseshell comb. The only solace Griet finds in the household is when she is cleaning Vermeer's studio, a task that requires her to clean without appearing to have moved anything. There, she imagines what the painter is doing, and what it would be like if his eyes fell upon her. Soon, she begins to notice that Vermeer's eyes do follow her around rooms, and gaze, almost longingly, at her. Vermeer's eyes are not the only ones that track Griet. His patron, van Ruijven, regularly gropes Griet and makes inappropriate comments about her. van Ruijven decides that he would like to be in a painting with Griet, an idea that horrifies her. It becomes very clear that Vermeer also does not want to paint van Ruijven with Griet and wants to protect her from this lascivious man. Van Ruijven impregnated the last maid that he wanted painted, and Vermeer wants to protect Griet from the same fate. He strikes up a deal to paint Griet on her own for van Ruijven, rather than having her sit with him.

Before this, Vermeer and Griet began to spend a lot of time together when Griet began assisting him with his paintings. Griet was given the task of purchasing paint supplies and grinding them in the evenings before Vermeer painted in the afternoons. The fact that they were working so closely together had to be kept a secret from the family, especially from Catharina, who would certainly be jealous. When Vermeer begins painting Griet, however, it becomes almost impossible to keep this secret from Catharina. Around this time, Pieter the son becomes more aggressive in his pursuit of Griet and even shows up at the Vermeer's doorstep on her eighteen birthday to propose to her. At this time, however, Griet is so infatuated with Vermeer that she cannot contemplate leaving his household, despite the warnings she's received from his friends that Vermeer is only interested in himself and his art. He will ruin her, they warn. But Griet doesn't listen and is eventually convinced to wear Catharina's pearl earrings in the painting, even though Griet knows that doing so will land her on the streets. Sure enough, when the painting is complete, Catharina finds out that her husband has been painting Griet and is outraged. She is extremely jealous, rightfully so, and tries to slash the painting with a palette knife. Griet runs from the house as Catharina goes into early labor, and never looks back.

In the epilogue, ten years later, the reader learns that when Griet ran away from Vermeer's household, she ran into the arms of Pieter the son, whom she later married. She never saw Vermeer again, and heard that he passed away, leaving behind eleven children and a great deal of debt. One morning, while Griet is working the butcher stall, Tanneke, the old maid, comes to fetch her, claiming that Catharina wants to speak with her. Griet has not interacted with any member of the Vermeer family in over ten years, and has no idea why Catharina wants to see her. When she arrives, she is overcome with emotion upon seeing Vermeer's household again, and wishes she could see him, or the painting, one last time. In his will, Vermeer requested that Catharina give Griet the pearl earrings from the painting, which is why Catharina has called her here. It is clear that Catharina has not forgiven Griet, or her husband, and does not want to hand over the pearls. But she does, and Griet pawns them, wanting to erase the memory from her life. Griet uses the twenty guilders she received from the sale to cover the Vermeer family's butcher debt, and keeps five guilders for herself, which she swears she will never spend.

More summaries and resources for teaching or studying Girl with a Pearl Earring.

Girl with a Pearl Earring from BookRags. (c)2022 BookRags, Inc. All rights reserved.