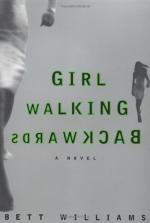 Bett Williams
This Study Guide consists of approximately 18 pages of chapter summaries, quotes, character analysis, themes, and more - everything you need to sharpen your knowledge of Girl Walking Backwards.

In Girl Walking Backwards, a teenager named Skye must deal with a variety of problems, from a New Age addict mother, to a schizophrenic friend, to her own sexuality. The book begins with Skye applying for community service positions; she wants to work at a runaway shelter but the man running it thinks she has problems herself, so she ends up working for Planned Parenthood. There, she must give peer education talks, and reveals that she is not heterosexual. Skye has a complicated family history, with divorced parents. Her mother has become an active member of a New Age group called Matrix, and found out that Skye is gay through Skye's "boyfriend's" mother. Skye's mother Anna tries various means to "cleanse" Skye, from astrology to rebirth. Skye also has problems at school, as she struggles to find a topic for her English paper, eventually choosing to work on Virginia Woolf. Though she is a talented student, Skye will not be allowed to go to college unless she goes through a cleanse approved by her mother.

One day, Skye meets an intriguing girl called Jessica at a cafe, and they go shopping and find a dead bird together. On the other hand, Skye also has some friends from the volleyball team, including a clean-cut girl called Lorri. She continues to see Riley and is bothered by her mother, who thinks that a friend of the family molested Skye when she was younger, under the influence of drugs. The more Skye thinks about it, the more she comes to believe this, though it most likely never happened.

Skye goes to visit her father, and hangs out with his friends. However, she discusses the family friend with him, and her father is certain that she was not molested. When Skye goes back home, she finds out that Jessica has been transferred to another institution, farther away. Skye finds Mol and the two girls track Jessica's online personality, finding out that Skye's sexuality did not play a role in her breakdown. Back at home, Anna finds the dead bird and freaks out, and Skye briefly runs away; when she returns, she discovers that her mother is in a psychiatric hospital, as well. Going to the library, Skye finds Lorri, and the two girls bond. First, they bury the bird, then they go to Lorri's house, and eventually begin a relationship. The book ends with Skye deciding to help her mother, and on the verge of her relationship with Lorri.