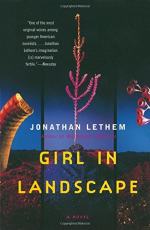 Jonathan Lethem
This Study Guide consists of approximately 36 pages of chapter summaries, quotes, character analysis, themes, and more - everything you need to sharpen your knowledge of Girl in Landscape.

This detailed literature summary also contains Quotes and a Free Quiz on Girl in Landscape by Jonathan Lethem.

The following version of this book was used to create this study guide: Lethem, Jonathan. Girl in Landscape. New York: Vintage Books, 1999.

The novel begins in Brooklyn, New York at an unspecified point in the future. Earth is in a state of environmental and economic decline, and New York politician Clement Marsh has failed to be reelected to his political office. He and his wife Caitlin have decided to move to a planet called the Planet of the Archbuilders. The Archbuilders, the indigenous species, are peaceful, intelligent, and humanoid. Caitlin takes her children—13-year-old Pella and younger brothers David and Raymond—to the Coney Island beach so they can see it before the family leaves the planet. Caitlin is soon diagnosed with a brain tumor. She dies shortly before the rocket to the planet is scheduled to leave.

Clement, Pella, Raymond, and David arrive at a small settlement on the planet. There are only a few other children: Bruce Kincaid, Martha Kincaid, and Morris Grant. The Archbuilders have made the planet’s climate perpetually temperate, and food grows in the ground without any work or cultivation. Some of the residents hope that Clement will instate sociopolitical organization upon the small settlement, but Clement claims that he is not interested in being a politician in the settlement. The first Archbuilder that Pella meets is called Hiding Kneel. Archbuilders have extraordinary linguistic capabilities, but English is a highly limited language to them, so they sometimes have difficulty communicating in English.

Pella soon discovers that, due to the environmental viruses on the planet, she has the ability to project her consciousness into household deer, which is the name used for a specific small animal on the planet. She uses the power often and spies on the community as a deer. Clement soon comes into conflict with a settler named Efram Nugent. Nugent hates the Archbuilders and hates Clement’s attitude that humans should be open to cultural and scientific exchange with the Archbuilders. One day, Nugent accuses a settler named Hugh Merrow of having sexual intimacy with Archbuilders. Nugent bullies and persecutes Merrow, and soon Merrow decides to leave the settlement, much to Clement’s chagrin. Pella eventually discovers that Clement and a female settler named Diana Eastling have begun to have a sexual relationship. Pella, still very much in grief for her deceased mother, dislikes this development.

One day, as a deer, Pella sees that Hugh Merrow’s abandoned house is on fire. She goes inside and finds a murdered Archbuilder in the house. She knows that the Archbuilder must have been killed by Nugent. Pella makes no accusations, because she does not want anyone to know about her deer projection ability. However, after Morris Grant accuses an Archbuilder of sexually molesting a child, Pella knows that Nugent must have coerced Morris into doing so Pella persuade Morris to accuse Nugent of raping her. In a rage, Nugent locks Morris in a shed, and then Morris’ older brother Doug shoots and kills Nugent. By the end of the novel, the settlement has diminished significantly in size, but it is more peaceful. Pella decides to name the settlement after her mother.

More summaries and resources for teaching or studying Girl in Landscape.