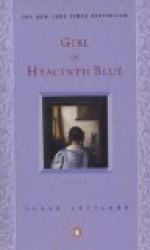 The Girl in Hyacinth Blue proceeds backward in time, following the history of one Vermeer painting, of a girl in a blue wrap, inside of an open window. The painting has enormous value in the present, but as the novel proceeds back to the time when it was painted, its value rises and falls based on whether its owners know where it came from, and whether they see any value in art.

Except for this painting, which is present in every chapter, The Girl in Hyacinth Blue is really a collection of linked short stories. The stories vary from a coming of age story, to stories of love and loss, of murder and execution, to longing and nostalgia and death. The history goes from the present day (the book was written in 2000) back to the mid-seventeenth-century, when Vermeer made the picture.

From the Holocaust to a Dutch flood, back to the financial crisis of Vermeer’s own household, the characters who value the painting find that it gives them something that transcends time and place. They hold onto the painting for its ineffable qualities, and part with it only when necessary. If they take money for it, they do so only because the money will have a profound affect on their lives.

In this composite picture of the culture that touched this one painting, Susan Vreeland has painted a portrait of her own, of the past that comes down with each work.

In the first of eight chapters, a boy’s death prompts a school teacher to think of his own death, and to reveal his cherished painting to a colleague who will value it. The teacher who owns the painting knows that his father acquired it from the household of a Jewish family that had been deported for execution, and he cannot reveal it to the world, but he needs his colleague to understand its value.

The second story depicts a Passover holiday among Jews who are anticipating the Holocaust. Their pigeons had brought them news of the seizure of the diamond trade in Amsterdam, and they kill their own pigeons so as to stay out of trouble with the Nazis. The girl who kills the pigeons feels a certain kinship with the girl looking out the window in the painting, and she knows that this holiday has marked the end of something for her, and the beginning of something else, a life of deeper knowledge for her.

The third story centers on the parents of a girl who is in love with and engaged to a boy. The girl's mother wants to give the painting as an engagement gift, but the husband demurs because the painting makes him think about a girl he loved briefly, before his marriage. When the wife is angered by this invocation of earlier love, the husband agrees to give up the painting as a concession to his wife, and a tribute to their marriage.

In the next story, the narrator is a woman in high society, who has an affair with a musician. When the affair breaks up her marriage, she escapes from her husband by selling the painting.

In the fifth story, the painting arrives in the household of a Dutch family whose house and lands have been flooded. The painting was put in their boat with an infant, and a note: Sell the painting, feed the baby. The wife wants to keep both baby and painting, but when she realizes its value—it can give her and her husband what they need to live well—she sells it and uses the money to fund their homestead.

The sixth story tells how the painting ended up in the boat in the previous story. An engineering students has fallen in love with a girl and gotten her pregnant. The girl bears twins, but she kills the girl child because she has a hare lip. When the murder is discovered, the girl is sentenced to execution, and her engineer boyfriend takes the boy child, and the painting from his Aunt Rika’s house, and gives the infant away.

The penultimate story follows the painter Vermeer through his day’s errands, as he looks for both money for his household and inspiration for his next painting. He lives in a chaotic household, and cannot often get quiet for painting. However, when he sees his daughter Magdalena after an outburst, he gets her to sit still so he can paint the picture that has been the subject of the other stories.

In the final story, Magdalena is a dreamy girl who wants to live the enormous life she sees everywhere around her. She wants to paint, to bring things to life as she sees them. But she marries, and remains buried, as an adult, with the housework that consumes her as a girl. She watches her father’s paintings leave the household to pay one debt or another, and later in life, she tries to buy the painting of herself. She cannot afford it at auction, though, and it goes to a wealthy family. She concludes that she would like to tell the history of the world through the most minute things in it, and she marvels as the mysterious fact that people would see her face and be moved by her expression, and she would never know them.