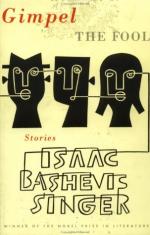 'Gimpel the Fool" was adapted for the stage by David Schechter and produced by Bakery Theater Cooperative of New York in 1982.

A documentary film called Isaac Bashevis Singer: Champion of Yiddish Literature was produced in 1991 by Ergo and is distributed by Ergo Media Inc. In the film, Singer discusses such topics as writing, religion, and Yiddish.

An Academy Award-nominated documentary, Isaac Bashevis Singer: Isaac in America was released in 1994. The film profiles the life of the author and includes readings from Singer's works by actor Judd Hirsch. It is distributed by Monterey Home Video.