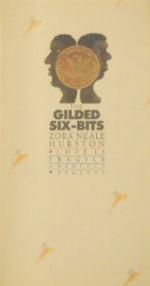 Zora Neale Hurston
This Study Guide consists of approximately 48 pages of chapter summaries, quotes, character analysis, themes, and more - everything you need to sharpen your knowledge of The Gilded Six-Bits.

Their Eyes Were Watching God (1937), widely considered Hurston's finest work, is a novel concerning the life and loves of woman growing up in an all-black community. It offers an exuberant and affirmative picture of love and selfrealization.

Mules and Men (1935), is a collection of folktales that Hurston recorded from her native town of Eatonville, Florida. She shares them with an insider's appreciation of their social and philosophical messages and a storyteller's flare for language.

The Blacker the Berry (1929), Wallace Thurman's Harlem Renaissance classic, tells the story of how intra-race color prejudice affects one family.

The Color Purple (1983), by Alice Walker (an African-American novelist who contributed to Hurston's rediscovery and who was greatly influenced by her writing), portrays a woman overcoming oppression by men and discovering herself in the rural South.

More summaries and resources for teaching or studying The Gilded Six-Bits.

The Gilded Six-Bits from Gale. ©2005-2006 Thomson Gale, a part of the Thomson Corporation. All rights reserved.