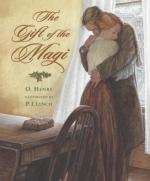 Related Topics
After Twenty Years
The Marry Month of May

The Gift of the Magi Movies & Media Adaptations

O. Henry
This Study Guide consists of approximately 37 pages of chapter summaries, quotes, character analysis, themes, and more - everything you need to sharpen your knowledge of The Gift of the Magi.

' "The Gift of the Magi" was adapted for film as a 21-minute segment of O. Henry's Full House, produced by Andre Hakim, starring Jeanne Gain and Farley Granger, narrated by John Steinbeck, and with music by Alfred Newman, Twentieth Century-Fox, 1952.

It also appeared in a 15-minute segment of the four-part Short Story Classics Series, produced in 1980 and distributed by Britannica Films.

It was also one of several O. Henry stories adapted for the musical Gifts of the Magi, produced in New York City at the Lamb's Theater, 1985.

This famous story has also been recorded on audiocassette by Miller-Brody Productions.

"The Gift of the Magi" was adapted as a stage play by Anne Coulter Martens.

More summaries and resources for teaching or studying The Gift of the Magi.

The Gift of the Magi from Gale. ©2005-2006 Thomson Gale, a part of the Thomson Corporation. All rights reserved.