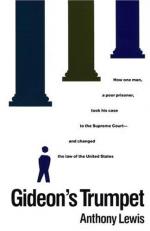 "There was very little in what he had sent to the Court to portray Clarence Earl Gideon the man. His age, his color, his criminal record if any - not even these basic facts appeared, much less any details for a ore complete portrait. Because the case came from the South, one's assumption might have been that he was Negro. He was not. Gideon was a fifty-one-year-old white man who had been in and out of prisons much of his life."
Chapter 1, Page 5

"Or not least, it might be a question arising under the Constitution - whether, for example, a man had been convicted of crime in a trial so unfair that it could not be called 'due process of law.' That was Gideon's case."
Chapter 2, page 15

"The one thing notable about the response, to an outside observer, was its assumption that the rule of Betts vs...