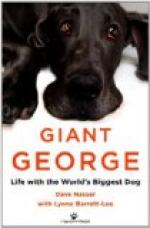 Plot Summary
+Chapters Summary and Analysis
Chapters 1: Life's Mistakes and 2: Things That Go
Chapters 3: Home Sweet Home and 4: It's A Jungle Out There
Chapters 5: Honey, I Shrunk the House and 6: The Birds and the Bees
Chapter 7: Party Animal and Chapter 8: The Road Less Traveled
Chapter 9: The Road Less Traveled and Chapter 10: Into Each Life...
Chapter 11: ...Some Rain Must Fall and Chapter 12: From Little Acorns
Chapter 13: Guinness on Tap and Chapter 14: And Baby Makes Four
Chapter 15: The Rising of a Star and Chapter 16: Be Careful What You Wish For
Chapter 17: The Dark Side of Fame and Chapter 18: Every Dog Has His Day
Chapter 19: Love Me, Love My Dog and Chapter 20: It's a Small World After All
Chapter 21: Showtime; Chapter 22: And the Winner Is... and Epilogue
Characters
Objects/Places
Themes
Style
Quotes
Topics for Discussion
Order our Giant George: Life with the World's Biggest Dog Study Guide

Dave Nasser
This Study Guide consists of approximately 44 pages of chapter summaries, quotes, character analysis, themes, and more - everything you need to sharpen your knowledge of Giant George: Life with the World's Biggest Dog.

In the book "Giant George: Life with the World's Biggest Dog," author David (Dave) Nasser tells the story of his family's life with their pet Great Dane who grows to be the world's tallest dog. Christie, Dave's wife, makes a deal with Dave that she will move to Tucson if he allows her to get a dog. She chooses a Great Dane, whom they name George. Dave records their lives through six years as they are married, buy, and renovate a home, lose two pregnancies, finally welcome a daughter into their home, and marvel over George's surprising growth. A group of friends suggest to Dave that he should enter George in the Guinness competition for the tallest dog. George wins the competition as well as a spot on the Oprah Winfrey Show. In conclusion, Dave summarizes that it is not George's title that matters most, but that they are a family.

When Dave and Christie get married, Dave does not have any particular interest in having a dog. Dogs to him mean responsibility. Christie, however, has always wanted a dog of her own and makes this a prerequisite to her agreement to move to Dave's hometown of Tucson, Arizona. Christie chooses a Great Dane because the breed has the reputation of being friendly, calm, and not likely to chew up the house. They settle on a dog who is the runt of his litter as their pet, but do not take into consideration that they are still living in an apartment. Since Christie works as a pharmaceutical salesperson, much of George's care falls to Dave. He is frustrated by the clingy, loud puppy who seems to be getting bigger by the day. Dave announces to Christie that they have to give George away. It is just before Dave is about to call one of the people who has requested to be George's new owner that Dave realizes that he can't give George away because the puppy is part of the family.

Things begin to look up when Dave and Christie finally find a house to buy. It is a fixer-upper, however and therefore, Dave is busy doing renovation work at the house. When Christie decides that she is ready to start a family, Dave realizes that he needs to put the renovations into high gear. The baby is born but Dave and Christie are both heartbroken when they learn that their baby has severe birth defects. He does not survive past the 21st week of Christie's pregnancy. Dave finds himself taking the lead from George on how to behave around Christie. He is surprised at how sensitive George is. About a year later, Christie loses her second baby.

About the same time that Christie learns that she is pregnant for the third time, George tops out at a weight of two hundred and forty-five pounds. A group of friends with whom Dave and Christie have been spending their Friday nights suggests to Dave that he submit George to the Guinness book of world records' competition for the world's tallest dog. While the group intends the competition to be fun, they are surprised by what a challenge it turns out to be. They encounter a cruel person who puts snide comments on George's website as well as another who issues a challenge to the Guinness people concerning the validity of George's measurements. Despite the roadblocks, however, George is named the world's tallest dog. The title comes with an appearance for George and Dave on the Oprah Winfrey Show. Dave decides that despite George's titles, what is most important is that he is part of the family.

More summaries and resources for teaching or studying Giant George: Life with the World's Biggest Dog.

Giant George: Life with the World's Biggest Dog from Gale. ©2005-2006 Thomson Gale, a part of the Thomson Corporation. All rights reserved.