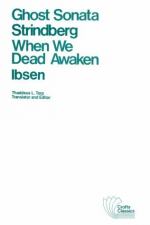 This detailed literature summary also contains Quotes and a Free Quiz on The Ghost Sonata by August Strindberg.

The Ghost Sonata by Johan August Strindberg tells the story of a chance encounter between a Student and an Old Man which leads to the Student becoming involved in the Old Man’s attempts to exact vengeance on a wealthy but dysfunctional family. It is divided into three scenes.

The Old Man joins the Colonel in the drawing room and reveals that he is calling in all of the Colonel’s debts meaning that the Old Man owns all of the Colonel’s property. The Old Man discloses that the Colonel is not really a nobleman and not really a colonel: that he is a servant who has been living under a false identity for most of his life. The other guests arrive for the ghost supper and the Old Man criticizes them for all of the immoral things they have done in their lives. He announces his desire for the Student to marry the Young Lady so that the Young Lady can finally have some good in her life, in contrast to the misery and lies of her family home. The Old Man is interrupted by the Mummy who claims that he is just as immoral as the rest of them and has no right to judge anyone else. She calls for Bengtsson who reveals that the Old Man once murdered a Milkmaid to cover up a crime that she had witnessed him committing. The Mummy instructs the Old Man to kill himself, which he does.

Scene 3 takes place inside the apartment building in what is known as the hyacinth room: a room in the Colonel’s unit filled with flowers where the Young Lady resides. The Student asks the Young Lady to marry him. She says that it would be impossible but refuses to explain why. The Young Lady explains that the Cook in the household is slowly starving her to death by draining the nutrients out of her food. The Student tells the story of his father’s death. His father used to attend gatherings with the same people over and over again for many years. The people would never say anything new to each other or criticize each other. The Student’s father hated these people but continued spending time with them. One night, he decided to tell all of them exactly what he thought of them after which he was imprisoned in a madhouse where he eventually died. The Young Lady abruptly becomes unwell and quickly dies. The Student reflects with sadness on how unpleasant the Young Lady’s life had been and hopes that she is now in a better place.