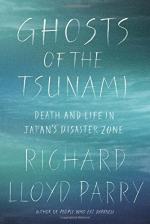 Ghosts of the Tsunami Quotes

But there was muck in her eyes, and there were no towels and no water, and so I licked Chisato's eyes with my tongue to wash off the muck, but I couldn't get them clean, and the muck kept coming out.
-- Sayomi Shito (Jigoku)

Importance: Sayomi's recollection of her efforts to clean her dead daughter's eyes is heart wrenching and disturbing, emphasizing the sense of devastating grief which a mother must have felt upon holding her child's corpse. The futility of her attempts to get the 'muck' off of Chisato's face speaks to the loss of rational thought experienced by Sayomi in that most terrible moment. Human loss is brought poignantly into the center of the narrative, showing ways in which fallible people attempt to process this loss.

It is conventional to picture such reunions as joyful moments of emotional release. But the emotions are too big and too mixed with despair.
-- Richard Lloyd Parry (Jigoku)