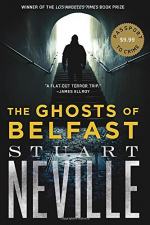 Stuart Neville
This Study Guide consists of approximately 100 pages of chapter summaries, quotes, character analysis, themes, and more - everything you need to sharpen your knowledge of Ghosts of Belfast.

This detailed literature summary also contains Quotes and a Free Quiz on Ghosts of Belfast by Stuart Neville.

The following version of this book was used to create this study guide: Neville, Stuart. The Ghosts of Belfast. Harvill Secker Random House as The Twelve, 2009.

The Ghosts of Belfast opens in McKenna’s bar in Belfast, Ireland, where Gerry Fegan sat attempting to drink enough to drown out the presence of the twelve ghosts that continually haunted him. As a hit man for the Republican party during the Troubles, Fegan had been responsible for the deaths of the twelve people who now hovered over him constantly: the woman with her baby, the butcher, the young boy, the three British officers, the two members of the Ulster Defense Regiment, the two Ulster Freedom Fighters, and the Royal Ulster Constabulary officer. They made no noise except the screaming that accompanied Fegan’s attempts to sleep every night.

Michael McKenna, a friend of Gerry’s from the party and a prominent politician, appeared at Fegan’s side and offered to accompany him home. Gerry watched as the ghost of the boy appeared at the side of McKenna and made the shape of a pistol with his hand. McKenna had tortured the boy, a snitch to the British, before stepping back to let Gerry finish the work. On the way back to Gerry’s house, McKenna talked to Gerry about a chance meeting Gerry had had with the boy’s mother only that afternoon. After Gerry had spoken with her, the mother had gone to the police and told them that she knew where her son was buried. McKenna was displeased and asked Gerry why he had told the boy’s mother anything. Gerry replied that he had hoped that it would appease the boy’s spirit, but that it had not.

After having invited McKenna inside, Gerry was guided upstairs and to his bedroom (where his gun was kept) by the spirit of the boy. Gerry understood that the boy wanted him to kill McKenna. He confronted McKenna with the gun, forced his friend out of his house, and made McKenna drive to a remote industrial estate. After making McKenna call the bartender and report that he had left Fegan at home, Fegan killed McKenna without mercy. He noticed that the boy’s spirit had disappeared from his side.

Gerry realized that, by killing the people who had commanded the deaths of his victims, he could gradually make the spirits disappear. He killed the thug Vincie Caffola, responsible for the deaths of the two Ulster Defense Regiment men, in the midst of a riot following Michael McKenna’s wake. Fegan’s actions sparked the interest of the party and the British government. Paul McGinty, a prominent member of the party, asked Fegan to deliver a threat to Michael’s niece, Marie, who had made herself a pariah by marrying a policeman. During the conversation, Fegan noticed that the woman, her baby, and the butcher were pointing their fingers at McGinty’s head.

Fegan delivered the message but also offered Marie his protection against the party. The British government called in David Campbell, a double agent who had served under McGinty until recently. Campbell was welcomed back by McGinty, who asked him to watch Fegan to see if he was still in the party’s control. When Fegan defended Marie and her daughter from an attempt made by Campbell and Eddie Coyle to intimidate her, injuring Coyle in the process, McGinty had Fegan beaten up in his jail cell and ordered Campbell to kill Fegan.

Fegan didn’t recognize the cop who beat him up, but the ghost of the Royal Ulster Constabulary officer wanted him. Campbell tailed Fegan on his way home, but was surprised and cornered by Fegan when he attempted to enter his house. Fegan pressed Campbell for information but was unable to learn the identity of the party’s cop. Campbell managed to escape Fegan in a moment of distraction, but not before Fegan noticed that the spirits of the two Ulster Freedom Fighters wanted Campbell. Campbell had been the informant who had turned them in, saving his own skin by claiming that a party member who had discovered his identity was about to sell Paul McGinty to these UFF men.

Fegan killed Father Coulter, a priest who had run away instead of preventing Fegan from killing the three British soldiers, and met Marie at the airport where McGinty had attempted to force her onto a plane. Marie, Ellen, and Fegan fled to Portcarrick along the Antrim Coast. Fegan left Marie and Ellen there, and returned to Belfast. There, he interrogated McGinty’s lawyer, Patsy Toner, as to the identity of the rotten cop. The cop, Brian Anderson, had given the name of the Royal Ulster constable to the Republicans in exchange for money. Fegan made Toner call the man and ask him to meet. When Anderson arrived, Fegan killed him.

The police had put out a missing person’s alert on Marie and her daughter and the party soon found their location in Portcarrick. Campbell and Eddie Coyle arrived and kidnapped Marie and her daughter, taking them to the farm of the party’s brutish leader, Bull O’Kane. O’Kane, with McGinty, used Marie to entice Fegan down to the farm. Fegan arrived and, along with Campbell (whose duplicity had been discovered by O’Kane) was prepared for execution.

Campbell managed, at the last moment, to rear up and injure O’Kane before being fatally shot himself. Fegan then killed Campbell. He left O’Kane where he was and went to free Marie and her daughter, who were being held hostage by McGinty. McGinty revealed that he had been Marie McKenna’s lover, and was possibly the father of her daughter. Fegan killed McGinty, who had coerced Fegan into setting the bomb that killed the mother, her baby, and the butcher.

Fegan saw that the mother’s ghost was still with him, and she pointed her finger at his head. As Fegan pled for mercy, Marie’s daughter appeared and ran to Fegan. The sight of the child appeased the spirit of the mother, and she disappeared, allowing Fegan to live. After having driven Marie and her daughter away from O’Kane’s farm, Fegan stowed away on a ship and sailed away from his homeland in hopes that it could heal.

More summaries and resources for teaching or studying Ghosts of Belfast.