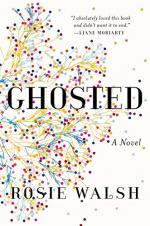 This detailed literature summary also contains Quotes and a Free Quiz on Ghosted by Rosie Walsh.

The following version of the book was used to create this guide: Walsh, Rosie. Ghosted. Viking, 2018.

Ghosted, by Rosie Walsh, is both a romance and a mystery. It tells the story of a woman named Sarah meeting Eddie, who seems to be the perfect man for her. After spending one week together, Eddie cuts off all communication. Sarah becomes obsessed with discovering what happened. Through the telling of their story, Walsh examines how a tragedy in their past has influenced their current relationship.

The story begins on the last day Sarah and Eddie spend together. Sarah and Eddie lay in a field where Sarah used to camp with her sister Hannah. Sarah does not want to think about Hannah because it makes her sad. Eddie wants to know everything about Sarah, but she avoids the subject.

Two weeks later, Sarah is driving with her friends Jo and Tommy to a presentation at a school where Tommy is introducing a sports plan. Eddie has disappeared and is not responding to Sarah’s messages. She is sure something has happened to her. Jo and Tommy think Eddie just is not interested in a relationship. Tommy asks if Eddie knows Sarah is married. Sarah and her husband are separated, but Sarah realizes their charity website still identifies them as married. She thinks this is the reason Eddie stopped talking.

Sarah and Eddie had met while Sarah was in England visiting her parents on the anniversary of the accident. They had liked each other immediately and spent the next week together before Eddie was scheduled to go on vacation.

The car arrives at the school, which was where Tommy and Sarah had attended. Tommy is nervous because the sports director there was his high school bully. He informs Sarah that Mandy and Claire will also be there, which upsets Sarah.

Before Eddie had left on vacation, he had offered to cancel his trip to be with Sarah. He had also asked for all of her contact information and friended her on Facebook.

Sarah uses every bit of technology available to her to try to contact Eddie. She keeps an eye on his Facebook account and checks the website for his business. She calls his workshop but does not leave a message. She leaves a message on his Facebook page asking for information about where he is. She receives two responses saying he canceled his trip and disappeared and that he has not been at football for weeks. Sarah starts receiving calls where the caller hangs up without speaking.

Sarah is unable to sleep and starts running obsessively. She jumps every time her phone buzzes. She cannot stop thinking about Eddie and it makes her unable to focus on conversations with others. She also makes poor choices at work. When she sees Eddie is online, she tries to message him, but he quickly goes offline.

After calling her friend Jenni for advice, Sarah starts writing messages to Eddie telling him about her life. She starts by telling him that she and Tommy grew up together. She had a little sister named Hannah who had a best friend named Alex. Tommy moved to the United States when Sarah was 15. Sarah became friends with Mandy and Claire. At the age of 17, she went to the U.S. to stay with Tommy.

Sarah meets her ex-husband Reuben and his new girlfriend, Kaia, at a restaurant in England. Sarah cannot focus on the conversation when she sees on her phone that Eddie is online and typing a message. However, when he goes offline, there is no message from him.

Sarah again writes to Eddie and tells him that she had a car accident when she was 17 and lost her sister Hannah. She went to live with Tommy because she could not stand being in England anymore. Tommy and Sarah met Jo in Los Angeles and became friends with her. Sarah later met Reuben and married him.

Sarah’s parents return to their house after spending weeks with her grandfather, who was ill. They have brought her grandfather with them. Sarah is still running when she cannot sleep. After a run, her grandfather notices she is upset. Sarah tells him about Eddie. He tells her he too lost a woman he loved when he was young. Though he loved his wife, if he could go back, he would not have given up on that relationship.

Sarah again writes to Eddie and tells him about living with Tommy in the United States. She had worked as a house cleaner. One day the young daughter of one of her clients broke her arm and Sarah had to take her to the doctor. While the girl was being treated, she left the hospital to buy her a gift and met Reuben taking a break from being a clown at a party. Reuben had come back to the hospital with her to cheer up the girl. That was how their Clowndoctors charity began.

Sarah goes to London for a work meeting and sees a man on the train wearing a football jersey with Eddie’s team name on it. She looks up the football schedule and goes to a game on her last night in England. The game has been rescheduled, so she is too late. A football player plays a joke on her that winds up with her in the locker room where the team is changing. When she rushes out, a player follows her and figures out who she is. He tells her she does not want to find Eddie.

Sarah stays at Tommy’s house and goes downstairs to go for a run at 3:00 a.m. She finds Jo naked in the kitchen and learns that Tommy and Jo are in a romantic relationship.

Sarah writes Eddie a final letter to tell him good-bye. Then she returns to the U.S.

Sarah goes to Jenni’s house and they talk about Eddie. Jenni’s husband comes home and asks Sarah if she has been taking care of Jenni. He informs her that Jenni had her pregnancy test after her last round of IVF that day and it was negative. They will not be able to have children.

Sarah goes for a run the next morning and then heads to work. She thinks she sees Eddie in a taxi.

Reuben and Sarah go to Fresno to pitch Clowndoctors to a hospice company. Sarah gets angry at the hospice representative during the meeting. Reuben admonishes her for possibly losing the contract. While they are at the airport to return home, Jenni calls Sarah to tell her that Eddie had been at their office looking for her.

Sarah starts to wonder about Eddie’s identity. Tommy has suggested their meeting could not have been a coincidence. Sarah is worried that Eddie may be connected to the accident.

Sarah gets upset at work after seeing Reuben and Kaia cuddling. After a confrontation between Jenni and Reuben and Kaia, Sarah abruptly decides to go to the clinic.

Later, she sits on a bench and thinks about her last day with Eddie. She realizes he saw her maiden name on Sarah’s Facebook page. She writes him a message saying she knows who he is and that they have to talk.

Eddie and Sarah meet. Eddie is Alex’s older brother. It was not Hannah that died in the accident, but Alex. Hannah stopped talking to Sarah after the accident because she thought it was Sarah’s fault. Eddie’s mother also blames Sarah. Eddie had stopped communicating her because he believed a relationship with her would be bad for his mother’s mental health. After Sarah tells Eddie all about Alex’s last day alive, he leaves. Afterward, Sarah says out loud that she is pregnant.

Sarah goes out for dinner with Jenni and Javier. Jenni figures out that Sarah is pregnant and is upset. Sarah’s phone rings. It is Hannah. She tries to cross the street to hear the call better and steps out in front of a truck.

Eddie returns to England and begins to separate himself from his mother’s life. He cannot stop thinking about Sarah, though.

Eddie starts seeing a grief counselor. She tries to talk to him about getting outside help for his mother. He reacts with anger. Later, when he discovers his mother reading the letters he has written to Alex for years, the two argue. Afterward, he calls his mother’s nurse for help.

On his mother’s birthday, he and his mother see Sarah’s parents at a restaurant. The couple gets up and leaves suddenly. Carole insists on going home. There she reveals to Eddie that Hannah told her Sarah is pregnant. She knows the baby is Eddie’s and she worries that something bad has happened.

Eddie tracks down the hospital where Sarah is having the baby. He goes there and waits in the waiting room. While waiting, he reads through Sarah’s old messages and starts responding to some of them. He tells her he loves her.

Sarah finds out that Eddie is in the waiting room just as she is taken away for a caesarean section. She has a baby boy and asks Eddie to come back the next day to meet their son. She tells him that she loves him, too.

The story ends with Eddie and Sarah living together at Eddie’s. They throw a welcome home party for the baby, whom they have named Alex. At the party, they are surrounded by family and friends. Carole arrives. Eddie introduces her to Sarah and she thanks Sarah for giving her a grandson.