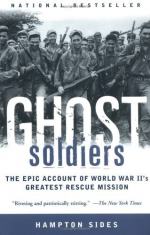 Related Topics
In the Kingdom of Ice

Hampton Sides
This Study Guide consists of approximately 27 pages of chapter summaries, quotes, character analysis, themes, and more - everything you need to sharpen your knowledge of Ghost Soldiers.

In 1942, following the outbreak of World War II, the Japanese assaulted the Philippine islands and ultimately captured them. This action resulted in many prisoners of war as the American Navy was unable to evacuate most soldiers. Many thousands of prisoners were interred in the Cabanatuan Camp where they languished without medicine, adequate food, or other supplies. In 1945, American forces were recapturing Luzon. Fearing the Japanese would massacre the approximately 500 surviving prisoners of war at Cabanatuan, a rescue mission was successfully carried out.

Subsequent to the overpowering Japanese assault on Luzon, the defending forces retreated to the Bataan peninsula and were then concentrated in a tiny area. Those who could not be evacuated surrendered by order of General King. The Japanese ordered a forced mass evacuation to clear the area for use as an offensive staging area. Under the direction of General Homma, the Japanese conducted a forced march through difficult terrain and weather with insufficient medicine, food, or transport, resulting in massive American and especially Filipino casualties in an event subsequently known as the Bataan Death March. The destination, Camp O'Donnell, proved a breeding ground of disease and many thousands of men who survived the march succumbed in camp.

Several thousand men were later transferred to Cabanatuan Camp, a smaller but still significant prisoner of war camp near Cabanatuan City. The camp served as a source of slave labor for Japanese military construction efforts, and conditions were exceptionally harsh with a correspondingly high mortality rate among the prisoners. When the American forces started to recapture the Philippines in 1945, many Japanese guards responded by massacring the prisoners of war. Fearing such an atrocity at Cabanatuan Camp, the army launched a rescue mission led by Colonel Mucci. The rescue party was composed of about 125 American Rangers and about 175 Filipino guerrillas, and was highly successful—over five hundred prisoners were rescued and approximately 1,000 Japanese combatants were killed. After the rescue, both the rescuers and the rescued were greeted in America as heroes even though the raid was quickly eclipsed by other major wartime developments.