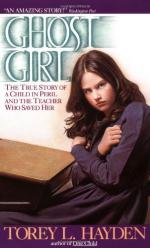 Ghost Girl: The True Story of a Child in Peril and the Teacher Who Saved Her Summary & Study Guide

Ghost Girl: The True Story of a Child in Peril and the Teacher Who Saved Her Summary & Study Guide Description

Ghost Girl: The True Story of a Child in Peril and the Teacher Who Saved Her Summary & Study Guide includes comprehensive information and analysis to help you understand the book. This study guide contains the following sections:

This detailed literature summary also contains Topics for Discussion and a Free Quiz on Ghost Girl: The True Story of a Child in Peril and the Teacher Who Saved Her by Torey Hayden.

The novel Ghost Girl by Torey Hayden tells the story of a special education teacher who helps to save her student, Jadie, and Jadie's two sisters from an abusive situation. Torey uses her experience working with elective mutes as well as troubled children in order to determine that Jadie is being abused. Although the stories this hunched over, closed up girl seem unbelievable, Torey refuses to believe that Jadie is making the stories up or imagining the actions that she talks about. Torey puts both her job and her reputation on the line when she pursues Jadie's case. In the end, Torey's instinct proves correct as Jadie and her sisters are permanently removed from their parents' home.

Torey first meets Jadie when she accepts a teaching position in a special education class in the small town of Pecking. Although Jadie is of normal intelligence, she has been placed in the special education class because she refuses to talk to anyone at school. Torey also notices that Jadie has a strange, bent over posture. With her experience working with elective mutes, Torey helps Jadie overcome her refusal to speak in school on the first day that she works with Jadie. When Jadie learns that Torey has worked with elective mutes in the past, she asks Torey if she listened to these children, believed what they said, and was able to help them.

Jadie's story deepens when she leaves what Torey believes to be a cry for help recorded on an old video recording machine that Torey has borrowed to use in class. In addition to the strange message that Jadie leaves Torey, another unusual aspect of this recording is that in the recording, Jadie is standing upright. Jadie generally stands or sits in a hunched over position. One day when Torey asks Jadie why she stands this way, Jadie tells her it is to keep her insides from falling out.

Jadie surprises Torey when she begins showing up in the classroom after classes have been dismissed. Torey allows Jadie to stay in the room with her. Her desk is located in a cloakroom, which has two doors but no windows. Jadie begins the practice of locking herself and Torey into this cloakroom. Once they are locked in, Jadie begins to reveal to Torey an almost unbelievable story of abuse, murder and horror.

Because Jadie can provide no firm details about her abuse, the authorities doubt the reality of Jadie's abuse when Torey brings their attention to the child's strange behavior. Jadie and her two sisters are removed from their parents' home, but because Jadie will not tell her story in person, the police are unable to press charges or even keep the children away from their home situation any longer than one week. Although she feels there is some abuse going on in Jadie's home, even Torey has spells where she questions if her actions in pursuing the case are the proper thing to do. Just as the children are about to be returned to their family, Jadie gathers her courage and talks to a police woman about what has happened to her. Just before Jadie is taken to her new foster home, she gives Torey a note on which she has written the words "thank you."

Ghost Girl: The True Story of a Child in Peril and the Teacher Who Saved Her from BookRags. (c)2022 BookRags, Inc. All rights reserved.