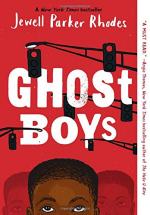 Jewell Parker Rhodes
This Study Guide consists of approximately 31 pages of chapter summaries, quotes, character analysis, themes, and more - everything you need to sharpen your knowledge of Ghost Boys.

The following version of this book was used to create this study guide: Parker Rhodes, Jewell. Ghost Boys. Little, Brown and Company, 2019.

Jerome Rogers, a Black 12-year-old boy, has been shot and killed by a police officer in his Chicago neighborhood. His spirit floats up above his body and he transitions to the ghost world. The novel flashes back and forth between the moments before Jerome's death to his existence as a ghost, his struggle to understand the factors that led to his death, and his family's fight to get justice for him.

On the day of the shooting, December 8, Jerome walks his younger sister, Kim, to school. He is worried, as always, about the school bullies who torment him and make fun of his appearance. That day, a new boy in school named Carlos befriends Jerome. They hide in the bathroom together to eat their lunch before the bullies find them. When the bullies begin beating up Carlos and Jerome, Carlos pulls out what appears to be a gun. The other boys back off and flee the bathroom, and Carlos reveals to Jerome that the gun is just a toy painted to look real. He offers it to Jerome to help him feel safe on his dangerous walk through Chicago's gang and drug infested streets. When Jerome tells Kim that Carlos has offered him the toy gun, she begs him not to take it. He does and while he plays with it on the way home, he is shot by Officer Moore who believed him to be armed with a real gun.

Jerome's family wants to pursue criminal charges against Officer Moore, so a hearing begins to determine if there is sufficient evidence to charge Officer Moore with any crimes. In the meantime, Jerome is existing as a ghost, watching his family suffer their anguish in his absence. Jerome drifts across Chicago from his home to the courthouse. In the court, Jerome realizes that Officer Moore's daughter, Sarah, can see and hear him. They begin getting to know each other before Jerome meets another ghost, Emmett Till. Emmett helps Jerome understand the deep rooted legacy of slavery and violence against Black people in the United States. Jerome helps to educate Sarah about the events of his death even as she initially defended her father.

After months of hearings, Officer Moore is not charged with any crimes, although Jerome is able to see how distraught he is about the shooting. Sarah starts a racial justice website that aims to include her father's experiences of racial bias and its tragic consequences.

Jerome understands Emmett Till's story and begins to learn that racism is not a practice confined to the South, but very much alive in Chicago. He begins seeing the ghosts of other young Black boys, realizing that his mission as a ghost is to ensure that no more boys after him lose their lives to senseless violence.

More summaries and resources for teaching or studying Ghost Boys.