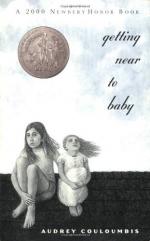 Getting Near to Baby - Chapters 19 and 20 Summary & Analysis

Audrey Couloumbis
This Study Guide consists of approximately 52 pages of chapter summaries, quotes, character analysis, themes, and more - everything you need to sharpen your knowledge of Getting Near to Baby.

Noreen and her daughters had watched the sunrise. She told them that she was sure Baby was in heaven with the angels. Still, all Noreen did was paint. Milly was worried about her, scolding her for letting herself go and getting so thin. Willa Jo was secretly happy that Aunt Patty showed up. She knew her mother needed help. When Aunt Patty suggested that she take the girls with her, in a secret place in her heart, Willa Jo wanted to go.

Uncle Hob sticks his head outside the dormer window, asking the girls if they'd like some water and a cheese sandwich. He passes out a mason jar of ice cold water. He hands an umbrella to Little Sister. He is dressed in a shirt and tie but crawls out on the roof...

(read more from the Chapters 19 and 20 Summary)

More summaries and resources for teaching or studying Getting Near to Baby.

Getting Near to Baby from Gale. ©2005-2006 Thomson Gale, a part of the Thomson Corporation. All rights reserved.