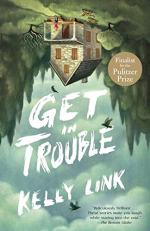 Get in Trouble Summary & Study Guide

Kelly Link
This Study Guide consists of approximately 41 pages of chapter summaries, quotes, character analysis, themes, and more - everything you need to sharpen your knowledge of Get in Trouble.

Get in Trouble Summary & Study Guide includes comprehensive information and analysis to help you understand the book. This study guide contains the following sections:

This detailed literature summary also contains Quotes and a Free Quiz on Get in Trouble by Kelly Link.

This study guide was created using the following version of this book: Link, Kelly. Get in Trouble. Random House Trade Paperback, 2015.

Get in Trouble is a collection of nine short stories that are connected by multiple themes instead of recurring characters. Each story stands alone.

The collection opens with “The Summer People” a haunting story of a teenaged girls tasked with caring for magical creatures known as Summer People, who cannot escape her duties. “I Can See Right Through You” is about a Demon Lover who contacts Meggie during a slumber party Ouija board session and falls in love. They both become famous, but their relationship does not last.

“Secret Identity” is the story of Billie, a 15-year-old girl, who has gone to meet a much older man after meeting him online. The man is unaware of her age and leaves the hotel after he sees the girl. Through Billie’s letter, she apologizes to the man and tries to explain why she did what she did and how she remains in love with him.

“Valley of the Girls” tells the story of a young man locked in a tomb with his sister while she seeks her revenge for how he humiliated her.

In “Origin Story” a young man and woman discuss their previous relationship with each other and flirt with renewing it. They explore her burgeoning superpowers and address his fears about his powers not being enough to save the world. But the woman has a secret child and grapples with whether or not to tell him the child may be his.

The story “The Lesson” finds a young, married, gay couple anticipating the arrival of their child via surrogate. While the birth mother is having complications with her pregnancy, the men attend their friend’s wedding on an island. While they are away, she goes into premature labor and the baby struggles to survive.

“The New Boyfriend” examines the relationships of teenage girls and the competition between them. When Ainslie receives a gift of a Ghost Boyfriend, Immy is jealous. She begins her own relationship with the Ghost Boyfriend to exorcise her jealousy and comes to terms with her friendships and burgeoning sexuality.

“Two Houses” tells the story of two spaceships on a long voyage in the future. Passengers on one of the ships are awakened for a birthday party. They celebrate by having cake and telling ghost stories, including one about two houses in which one a grisly murder took place.

“Light” is story of a woman living in Florida whose husband has left her. Her brother comes to stay with her and starts a relationship with one of his sister’s employees. When the employee attempts suicide, the woman decides to flee after a hurricane opens up a pocket universe.

The stories use magical realism and the supernatural to heighten the reality of the story. Other themes explores include escapism and alienation, dysfunctional relationships, and how the characters throughout the collection must grapple with the growing pains of coming of age.

More summaries and resources for teaching or studying Get in Trouble.

Get in Trouble from BookRags. (c)2022 BookRags, Inc. All rights reserved.