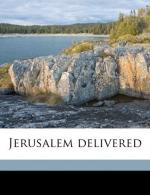 Torquato Tasso
This Study Guide consists of approximately 104 pages of chapter summaries, quotes, character analysis, themes, and more - everything you need to sharpen your knowledge of Jerusalem Delivered.

When Torquato Tasso's Gerusalemme Liberata first appeared in a pirated edition in 1579, it was hailed as a great, albeit slightly flawed, art epic in the tradition of Dante and Virgil. Tasso, himself, was angry that the poem had appeared in print without his permission, especially since the manuscript had received some harsh criticism from its first readers. By the time the poem was printed in an authorized version, in 1581, its reputation as an uplifting, patriotic, influential, and brilliant examination of Christian Europe's heroic past was already established. Fellow Italians and other Europeans celebrated the poem's meaning and message. The English poets, especially those writing in the 1650s- 1680s, were heavily influenced by Tasso's skill as a poet and word-crafter. Edmund Spencer and John Milton both credited Tasso's poem as an inspiration to their own epic poems, while literary critics such as John Dryden, Anne Dancier, and William Hayley all praised the work as the best modern epic poem before Paradise Lost. Although his poem achieved great success, Tasso either did not believe the praise or did not like the moral looseness of his characters. By 1591, he had drastically re-written the poem, eliminated all of the romance, magical, and adventure elements leaving only a moralistic and religious core. Tasso liked the finished product, but no one else did. Although few people read epic/heroic poetry for pleasure anymore, Gerusalemme Liberata continues to be one of the most important and influential works from the late Italian Renaissance.

More summaries and resources for teaching or studying Jerusalem Delivered.

Jerusalem Delivered from Gale. ©2005-2006 Thomson Gale, a part of the Thomson Corporation. All rights reserved.