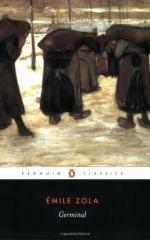 Émile Zola
This Study Guide consists of approximately 45 pages of chapter summaries, quotes, character analysis, themes, and more - everything you need to sharpen your knowledge of Germinal.

This detailed literature summary also contains Topics for Discussion and a Free Quiz on Germinal by Émile Zola.

Germinal starts when a young man by the name of Etienne Lantier arrives on foot at the Voreux pit. He is around 21-years-old, skinny but strong looking. He is greeted by a 58-year-old man nicknamed Bonnemort. The man tells him that there is no work for a mechanic in the mine. Bonnemort lives in the Village Two Hundred and Forty along with his son Maheu, Maheu's wife, and their seven children. Etienne Lantier finds work in the mine as a hewer and is integrated with the mining team that includes Maheu, Chaval and Catherine. Lantier immediately likes Catherine but Chaval sees nothing in Lantier but a competitor and a stranger who will steal the miners' salary. Two supervisors show up and after a quick inspection, they impose a fine on the team for faulty timbering. Maheu decides that the day is lost and that it is time for the team to go back home. Etienne follows the advice of some of his coworkers and rents a room at The Advantage, an Inn managed by Rasseneur. Etienne Lantier goes out for a walk and witnesses the rape of Catherine but doesn't intervene.

Etienne Lantier becomes a good hewer and meets Souvarine, a Russian anarchist. Joined by Rasseneur, the men hold long discussions concerning the future of the workers. After consulting with his friend Pluchart, Etienne Lantier creates a new local division of the "International" and moves in with the Maheus. On a payday in October, the mining company disguises a lowering of the salaries as a new mode of payment. The miners take offense as it ads insult to injury and decide to strike as the working conditions deteriorate quickly. Chaval is getting extremely jealous of the relationship between Catherine Maheu and Etienne Lantier. He takes her away to work at Jean-Bart, an independent coalmine. On December 15, the miners go on strike. A delegation led by Maheu meets with the mine director and demands a just mode of payment and bread everyday, but nothing is solved. The strike spreads and most of the Company's mines are stopped. Only Jean-Bart's miners, which is an independent mine, continue to work. The miners join the International. The company proves inflexible but the miners are determined to win.

The owner of Jean-Bart and Chaval manage to avoid a strike, but the strikers of the Montsou Company demolish the installations of the independent mine. The miners on strike march toward Montsou. They assault the mine's director house and nearly kill Cecile, the daughter of one of the mine's investors. The mob then assaults the local grocer's store and mutilates the grocer's dead body. In early February, the army is occupying Montsou. One of Maheu's children kills a young soldier and hides him under rocks. The striking miners face the armed soldiers at the mining pit and try to push them back. The armed guards fire and 14 miners end up dead. The miners put an end to the strike, but Souvarine proceeds to sabotage the mining pit. Water floods the mine and Chaval, Lantier and Catherine are trapped in the imploded mine while the rescue workers start to dig for possible survivors. Cecile is strangled by Bonnemort. Lantier kills Chaval, and after nine days, the two remaining lovers make love. Catherine dies soon afterward from exhaustion and after a few days, Etienne is rescued on the brink of starvation. He recovers in the hospital and leaves the mine behind him to go to Paris.

More summaries and resources for teaching or studying Germinal.