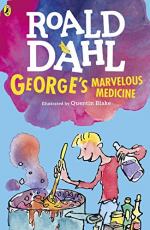 Roald Dahl
This Study Guide consists of approximately 21 pages of chapter summaries, quotes, character analysis, themes, and more - everything you need to sharpen your knowledge of George's Marvelous Medicine.

NOTE: This study guide was created using the following version of this book: Dahl, Roald. The BFG. Puffin Paperback Edition, 2013.

George’s Marvelous Medicine is a children’s novel by Roald Dahl that follows the misadventures of George in attempting to make a medicine to make his Grandma a nicer person. When the novel begins, George’s mom, Mary, is going shopping in town while George’s father, Killy, is out working on the farm. Mary tells George to behave and to remember to give Grandma her medicine at 11 o’clock. George is then left with cranky, mean, and selfish Grandma. Nothing George does for her is good enough, so he decides to make her a new medicine that will change her.

George sets to work on the medicine at once, adding everything from jujube fruit juice to spices, shoe polish, engine oil, and toothpaste. George brings the marvelous medicine to a boil, then pours some into Grandma’s medicine bottle. George then gives Grandma the medicine. It causes her to grow enormous, leading her to believe she is magical. George says this is not true, and demonstrates how the medicine works on a chicken. The chicken grows gigantic. It is as this time that both Mary and Killy get home. They are amazed by what they see. Killy is especially amazed because this means that large animals will ensure no one ever goes hungry again. He decides the medicine must be mass produced for farmers, which will make Killy and the family rich while making George famous.

Unfortunately, George’s second test batch of the medicine does not turn out well like the first. Tested out on a chicken, all it does is to grow the legs of the chicken because it is missing flea powder and shoe polish. The third batch of the medicine turns out only to grow the neck of a chicken, as the medicine is missing engine oil and antifreeze. The fourth batch of medicine has the opposite effect. It causes chickens to shrink. Grandma, angry and mistaking the medicine for tea, drinks it. She rapidly shrinks until she disappears altogether. George’s father is delighted, while George’s mother is sad at first. Ultimately, George’s mother believes Grandma disappearing has been for the best. George himself comes to feel trembly, as he knows he has been able to touch the world of magic with his medicine.