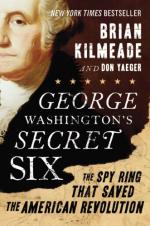 Morton Pennypacker is a Long Island historian who discovered that Robert Townsend was one of the two leaders of the Culper spy ring.

George Washington was the commander of the Continental army during the Revolutionary War and was responsible for putting together the spy ring. He later became the country's first president.

Robert Townsend was a native of Long Island who ran a store in Manhattan. He was recruited for the spy ring because of his acquaintances on Long Island and his ability to pick up information in New York City and was considered by Washington to be the key member of the group.

Major Benjamin Tallmadge was a top-ranking officer in the Continental army and Washington's spymaster. He was responsible for recruiting the spy ring members and managing the operation.

Abraham Woodhull was a Long Island...