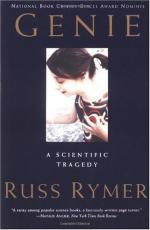 Russ Rymer
This Study Guide consists of approximately 24 pages of chapter summaries, quotes, character analysis, themes, and more - everything you need to sharpen your knowledge of Genie.

Genie: A Scientific Tragedy is the first book written by journalist Russ Rymer. This book explores the scientific actions taken when a thirteen year old girl was rescued after years of social isolation. Genie spent her childhood from the age of twenty months until she was thirteen strapped to an infant potty chair in a dark room of her father's house. This was done by the father in an attempt to protect what he thought was a mentally retarded child. Upon her rescue, Genie could not speak except a few simple phrases more than likely spoken to her repeatedly throughout her captivity. Genie became a celebrity in the scientific community, surrounded by scientists who wanted to study her. Somewhere along the way these eager scientists forgot they were dealing with a deeply disturbed child. Genie: A Scientific Tragedy chronicles Genie's life from the moment of her rescue until the moment science forgot about her, leaving the reader with a story that is both tragic and in some ways triumphant.

Genie's mother, Irene, married a man more than twenty years older than herself. At first they had a happy marriage, although it was often overshadowed by the demands of the husband, Clark's, mother. However, Clark made it clear to his wife that he did not want children. Despite this, Irene gave birth to a daughter who was left by Clark to die of exposure in the garage. A short time later, Irene gave birth to a healthy boy who survived thanks to the intervention of his grandmother. Another daughter would die from Rh blood poisoning. When Genie was born, she too suffered Rh blood poisoning but was saved by a blood transfusion at birth.

When Genie was still an infant, Clark's mother was killed by a hit and run driver. The driver was caught, but received a lenient sentence for the death. Clark was so distraught over this that he moved his family into his mother's house and shut them off from the world. When told that Genie was more than likely mentally retarded due to her blood transfusion at birth, Clark became convinced that he had to protect her from the outside world. Clark made a harness and used it to restrain Genie to an infant potty chair, left alone all day in a dark bedroom at the back of the house. Genie would be moved to a crib that was built of mesh at night, encased in a sleeping bag that was more of a straight jacket than a bedcover. Clark would often beat Genie if she made noise and would bark outside the door to frighten her into silence.

Irene, who had gone blind due to cataracts and a neurological problem, felt as though she too wee a prisoner in the home because there was little she could do without her husband's help. Eventually, however, Irene convinced her husband to call her parents and allow her to leave with the children. A short time later, Irene went to ask for aid from the health department's services for the blind, but happened into the general social services office by mistake. A social worker noticed Genie's odd stance and called her supervisor, thinking she had stumbled onto a case of undiagnosed autism.

Genie was taken to Childrens Hospital in Los Angeles and placed under the care of the psychiatry department. Immediately Genie was seen by a large number of doctors, including David Rigler who would eventually become her foster father. After weeks in the hospital, Genie was moved to the rehabilitation center associated with the hospital where she would come under the care of teacher, Jean Butler. After exposing the child to rubella, Butler would be granted temporary custody of Genie. Butler requested to become Genie's foster mother, but her petition was denied. Within days Genie would be moved into the Rigler home.

Genie came out of her family's home with only the ability to say a few simple phrases. During her time in the rehabilitation center and in Butler's home, Genie developed the ability to speak two and three word sentences. Genie, who was not potty trained when she was rescued, would learn to control her bowels in Butler's home, but lose this ability for a time in the Rigler home. In time, however, Genie would settle in well at the Rigler home and learn to control the temper tantrums and other behavioral problems that appeared to keep her from learning to speak.

When Genie turned eighteen, it became clear to all the scientists involved in her case that Genie would never learn to speak properly. The Riglers lost their grant to conduct scientific research on Genie and chose to have her returned to the custody of her mother. Within months, Irene, unable to care for Genie alone, had her placed in foster care. The first few foster homes where Genie resided proved to be abusive, causing her to be moved frequently.

In the late seventies, linguist Susan Curtiss released a book form publication of her dissertation dealing with Genie's case. Spurred on by Butler, Irene sued Curtiss, the other scientists actively involved in Genie's case, and Childrens Hospital. The case lingered for six years, finally ending without the hoped for financial reward Butler and Irene were looking for.

More summaries and resources for teaching or studying Genie: A Scientific Tragedy.