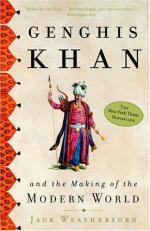 Jack Weatherford
This Study Guide consists of approximately 26 pages of chapter summaries, quotes, character analysis, themes, and more - everything you need to sharpen your knowledge of Genghis Khan and the Making of the Modern World.

Briefly tell the story of Temujin's childhood and how he became the Great Khan.

What made Mongol military tactics so spectacularly successful? Give at least three arguments and illustrate them with examples.

Discuss four benefits that Weatherford believes the Mongols provided to the world.

How was Mongol culture distinct from those they conquered? Give three examples and develop them in detail.

How was Khubilai Khan's rule of the Eastern Mongol Empire different from his grandfather's?

How did the Mongol Empire fall?

How did the image of Genghis Khan and the Mongols come to be tarnished in Western Europe and the Soviet Union and how was that image rehabilitated in the East and later the West?

More summaries and resources for teaching or studying Genghis Khan and the Making of the Modern World.

Genghis Khan and the Making of the Modern World from BookRags. (c)2021 BookRags, Inc. All rights reserved.