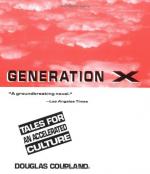 Douglas Coupland
This Study Guide consists of approximately 42 pages of chapter summaries, quotes, character analysis, themes, and more - everything you need to sharpen your knowledge of Generation X.

This detailed literature summary also contains Topics for Discussion and a Free Quiz on Generation X: Tales for an Accelerated Culture by Douglas Coupland.

This novel, perceived as revolutionary at the time it was published in the early 1990s, uses the individual stories as three good friends as metaphoric representation of the story of an entire generation - Generation X, young people born in the late 1950s and early 1960s. As the narrative explores the ways the three friends struggle to define themselves and their relationships, it also explores themes related to the function and nature of storytelling, the tension between materialism and self-expression, and the power/value of friendship.

The first part of the novel (narrated in first person by protagonist Andy) focuses on the conversations that take place over a picnic lunch between life-confused Andy and his equally confused friends Dag and Claire. As they eat their grilled chicken in a run-down suburb of Palm Springs (where they all live), they indulge in their habit of telling each other stories, what they all know are fictionalizations of uncomfortable truths about their individual lives. Interspersed with these stories are expositional chapters in which background information of each of the three friends is revealed: how they all came to Palm Springs, and how they came to be friends with each other.

Part Two, written in a more diary-like style, chronicles a series of events that began a few days after the picnic. Dag disappears, but eventually calls from Nevada. In explanation, he tells the story of a young man named Otis who decided to take a tour of the sites of the nuclear bomb tests that took place in the late Fifties and early Sixties. Upon his return, he offers souvenirs to his friends, one of which Claire perceives as dangerously radioactive and refuses to have anything to do with.

Shortly after moving in with Andy to avoid what she believes to be her radioactively contaminated home, Claire is visited by Tobias, a very handsome man with whom she's lustfully obsessed. Over the course of Tobias' few days visit, Andy and Dag confront each other about the relative aimlessness of their respective lives and how they feel inclined to blame their parents for how those lives have turned out. Meanwhile, Claire's best friend Elvissa pushes Andy, Claire, Dag and Tobias into revealing honestly described important personal memories. For perhaps the first time in their friendship, Claire, Andy and Dag don't disguise their feelings and/or experiences behind the mask of a story.

After Tobias leaves, and after Elvissa moves away from Palm Springs (apparently to work at a convent), Andy and his friends make plans for their Christmas vacations. Claire admits to a helpless desire to pursue Tobias and plans to go to New York, Andy decides to visit his parents, and Dag decides to stay put. Shortly before they go their separate ways, Dag accidentally sets an expensive car on fire, but manages to escape arrest.

Traveling home (to Portland Oregon), Andy comes to realize that he has misjudged his parents and their relationship, coming to realize they are essentially decent people and that he has to take responsibility for his own happiness. When he returns to Palm Springs, he receives a phone call from Claire who has also discovered the same thing. Having broken up with Tobias and having discovered that he is in fact involved with Elvissa (who didn't go to a convent but is in New York with Tobias), Claire tells what happened without resorting to hiding the truth behind the usual fictionalized façade. Dag, meanwhile, continues to evade facing the truth about the destruction of the car, even to the extent of lying to the police.

On New Year's Day, Andy discovers that Dag and Claire have moved to Mexico to open a hotel, and that they want him to join them. He packs up his few belongings and hits the road, on the way witnessing an intensely beautiful visit paid by a beautiful black bird to a charred black field. In celebration of the beauty of the moment, he receives a smothering cluster of hugs and laughter, an affirmation that he is perhaps, at last, on track with his life.

More summaries and resources for teaching or studying Generation X: Tales for an Accelerated Culture.