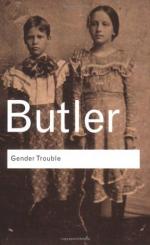 Judith Butler
This Study Guide consists of approximately 22 pages of chapter summaries, quotes, character analysis, themes, and more - everything you need to sharpen your knowledge of Gender Trouble.

Gender Trouble: Feminism and the Subversion of Identity Summary & Study Guide includes comprehensive information and analysis to help you understand the book. This study guide contains the following sections:

This detailed literature summary also contains Topics for Discussion and a Free Quiz on Gender Trouble: Feminism and the Subversion of Identity by Judith Butler.

Judith Butler's Gender Trouble begins with a seemingly simple question. In recent years, many feminists have defended the idea of a concrete feminine identity because they believe it is crucial for advancing the interests of women. Without a focal point conception of women, feminist identity politics would not be possible. However, as Butler points out, there are various postmodern and post-structuralist reasons to worry about the very idea of concrete identities much less the idea of well-defined, non-social conceptual boundaries. So, this leads to Butler's focal question: Can feminist identity politics survive without a feminist identity?

To answer the question, Butler focuses almost exclusively on questions surrounding the construction of feminine identity, rather than equally weighting this deconstruction with an analysis of feminist organizational tactics, political doctrines and so on. Thus, the book's three chapters focus on a gradual critique of the feminine identity as having a concrete form.

Chapter 1, "The Subjects of Sex/Gender/Desire," begins with a review of the argument that 'women' as a strictly defined category are not the proper subject of feminism. Rather, feminism does not have a concrete subject. This leads her into a discussion of the relationship between sex and gender. Many individuals are born 'sexed' in that they have a biological form, but what relationship does this bear to gender, if any? She then worries about the very idea of gender, what its origin is, to what extent it is connected to sex (it partly is and partly isn't on Butler's view). She is concerned about a strict binary distinction between sex and gender and a similar distinction between gender types. She points out that gender identity is complex in its relation to sex and that to appreciate these complexities, feminists must move further away from the traditional Western 'metaphysics of substance' which then leads her to focus on the linguistic structures that represent this metaphysics, something she also wants to critique.

In Chapter 2, "Prohibition, Psychoanalysis, and the Production of the Heterosexual Matrix," Butler inquires into the nature and origins of the concept of gender. She discusses structuralist perspectives on the idea and how the concreteness of gender can be exposed as absurd by Masquerade. She is interested in a genealogy of gender identification and discusses the theories of Lacan, Riviere and Freud in this regard. She rejects the idea that all power structures and cultural restrictions must be done away with to have a less repressive mode of gender identification (a view common amongst feminists) and argues that gender identification requires a social structure in order for it to be an achievement.

Chapter 3, "Subversive Bodily Acts," is the longest but focuses largely on a critique of Julia Kristeva, a discussion of Foucault's publication of the journals of Herculine Barbin, a 19th century hermaphrodite, her sympathetic critique of Monique Wittig and her view that traditional views of gender identity can be 'subverted' through masquerade and drag. In the conclusion, "From Parody to Politics" she argues that feminist politics really can do without a concrete feminine identity, and that doing without it will make solidarity and organization easier. She then argues that feminists with her view should pursue the deconstruction of feminine identity through parody.

More summaries and resources for teaching or studying Gender Trouble: Feminism and the Subversion of Identity.

Gender Trouble: Feminism and the Subversion of Identity from BookRags. (c)2022 BookRags, Inc. All rights reserved.