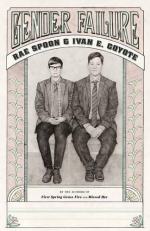 Gender Failure is 36 chapters long, each chapter told from either Ivan or Rae’s first-person perspective. Ivan has the odd chapters and Rae the even chapters. For the purposes of this guide, the chapters are broken into seven parts that include several chapters in each. Part 1 includes two chapters titled “Introduction” from first Ivan’s perspective then Rae’s. Ivan explains how they, both Ivan and Rae use the pronoun “they,” first worked with Rae and explains that they have had top surgery. Rae explains that since childhood they have failed at gender and have decided to retire from it altogether.

Part 3 includes the chapters “The Rest of My Chest,” “Prairie Gender,” “Gender Identity Interview for Adults (FtM) Questionnaire,” “Man Failure, Part 1,” “Thirteen Inches, Uncut,” and “Man Failure, Part 2." In “The Rest of My Chest” Ivan discusses their decision to have top surgery after 19 years of binding their breasts. In “Prairie Gender” Rae discusses growing up and watching the unfair burden on women they witnessed in the small-town prairie life in Calgary. “Gender Identity Interview for Adults (FtM) questionnaire” is from Ivan, and lists the questions Ivan had to answer when requesting top surgery. “Man Failure, Part 1” talks about starting to identify as not just female, and attempting a lesbian bar but leaving after women reject Rae’s male friends for being there. In “Thirteen Inches, Uncut” Ivan details their first visit to the plastic surgeon for their double mastectomy. In “Man Failure, Part 2,” Rae explains finding out about the trans identity and attempting (and failing) to become male identified.

Part 4 includes the chapters “Top Surgery,” “My Body is a Spaceship,” “Messages to Lynn,” “How to Be a Transgender Country Singer,” “Invested,” and “YouTube Gender.” “Top Surgery” talks about Ivan’s surgery. In “My Body is a Spaceship,” Rae discusses growing up with body issues, struggling with the idea of taking hormones to transition because of the effects on their voice. “Messages to Lynn” is a chapter of messages between Ivan and their friend Lynn about the surgery. In “How to Be a Transgender Country Singer,” Rae discusses the challenge of their identity combined with their music, and the different audiences it attracts. “Invested” is about Ivan’s recovery and a woman and transgender-man he inadvertently helped. In “YouTube Gender” Rae posts a video of them singing and includes a sample of the comments, which mostly question their gender.

Part 5 includes the chapters “Dear Family,” “How to Be a Transgender Indie Rocker,” “A Cautionary Tale,” “How to Be Gay When the Gays Won’t Have You,” “Many Moons," and “Drag Failure.” “Dear Family” is a letter/email Ivan wrote to their family about their top surgery. “How to be a Transgender Indie Rocker” is about Rae going to Germany and trying out the Indie Rocker scene. “Many Moons” is a story about Ivan’s first-time swimming post top surgery. “Drag Failure” is about Rae’s attempt (and failure) at being Cocolene, their short-lived drag identity.