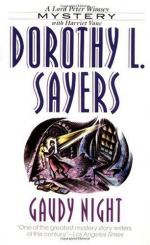 This detailed literature summary also contains Topics for Discussion and a Free Quiz on Gaudy Night by Dorothy L. Sayers.

Gaudy Night, by Dorothy L. Sayers, is an interesting mystery novel that begins when Harriet Vane decides to attend a reunion, known as a Gaudy, at Shrewsbury College, a fictitious woman's college at Oxford University. Harriet has not returned to Shrewsbury since graduating. She becomes a famous mystery writer after being acquitted for a murder she did not commit. The man who saves her is Lord Peter Wimsey, who has been trying to get her to marry him for the past five years.

Harriet is nervous about her return to Shrewsbury, wondering how she will be received by the faculty, students and staff. She is only attending because a classmate of hers is very ill and is attending the Gaudy before going overseas for surgery. In spite of her fears and nervousness, the reunion goes well. The only thing that mars the experience is the receipt of a prank letter that she finds just as she is leaving. She promises to attend future events at the school.

The Gaudy begins a series of prank poison pen letters written with letters cut out from newspapers, burnings in effigy and obscenities scrawled on walls. When the New Library is to be opened, Harriet receives an invitation and the school asks her to help them with the problem. Harriet goes to the New Library opening and takes up residence in the Guest Room where she stays for the remainder of the term. The College officials want the matter handled discretely without publicity or the authorities.

Harriet agrees to conduct the investigation for them. All evidence from any incident is directed to her and she documents the incidents as they occur, compiling a lengthy dossier.

One term runs into another term as the incidents continue, becoming more serious as one student is driven to try suicide. At this point, Harriet tells the school officials that they need to bring in experts. She eventually brings in her friend, Lord Peter Wimsey who is also an Oxford alum.

The attacks continue, becoming more serious as Harriet and the others try to trap the attacker. Peter does some research that takes him to York checking out clues. When he returns, after an attempt on Harriet's life, he reveals his suspicions and how he arrived at them at a meeting. The culprit confesses, thus bringing an end to the poison pen letters and violence.

Throughout the book, Peter keeps asking Harriet to marry him and she keeps saying no. She becomes more involved with his family and their problems when she meets his nephew, Viscount Gerald Saint-George who attends one of the Oxford colleges. The time spent working on the case has them all re-evaluating their feelings.

Gaudy Nights is quick and interesting reading. The reader will be caught up in the who-done-it and find it difficult to put the book down.