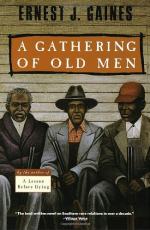 A Gathering of Old Men Summary & Study Guide includes comprehensive information and analysis to help you understand the book. This study guide contains the following sections:

This detailed literature summary also contains Topics for Discussion on A Gathering of Old Men by Ernest Gaines.

Set in Louisiana, the story of A Gathering of Old Men opens up after the recent murder of the Marshall Plantation’s boss, Beau Boutan. Candy Marshall, the plantation’s part owner and overseer, discovers his body. Having found the remains outside the residence of her virtual foster father Mathu, Candy suspects that the black man may have played a role in Boutan’s untimely demise, but she is nonetheless bound by loyalty to protect him from harm. Candy proceeds to gather everyone on the plantation, and when another local plantation resident, Miss Merle, arrives, Candy takes responsibility for the murder. Miss Merle is not convinced by Candy’s confession but decides to help her in the effort to protect Mathu. Candy then implements a plan designed to confuse the Sheriff that involves bringing local men to the Mathu’s house with shotguns and empty shells. She believes that so many possible suspects will render the crime unsolvable. Miss Merle helps spread the word and within hours, a dozen and a half men, all well into their seventies and eighties, arrive at the house with arms, set to play a part in the plan.

Although the Sheriff’s arrival is one of great anticipation, most of the plantation’s people are equally, if not more, anxious about the coming of a Cajun named Fix, a local known for his role as the leader of many past lynch mobs against blacks. His arrival seems inevitable considering that his son was the man who was murdered; the hunt for revenge will understandably be his main objective. Prior to his appearance, however, Sheriff Mapes and Lou Dimes, Candy’s boyfriend, arrive. After discovering the identity of the slain man, the Sheriff sends his deputy to locate and detain Fix in order to prevent him from building a lynch mob to retaliate against the plantation. Once again, Candy attempts to draw blame for the crime, but the Sheriff dismisses her, instead questioning the group of men who have gathered at the scene of the crime.

The first men to confess to the crime are Gable and Billy Washington, who both earn the wrath of Sheriff Mapes when their responses prove unsatisfactory. After a similar show of displeasure and force brings down the Reverend Jameson, the remaining men shock the Sheriff by maintaining their resolve to confess to the crime; even lining up so as to better receive their own respective physical attacks. After halting his interrogation and ruling out the involvement of the missing man named Charlie, the worker closest to Beau, Sheriff Mapes deduces that Mathu must be the murderer, as he is the only solitary black man with the demonstrated ability to stand against local whites.

Although Sheriff Mapes is convinced that Mathu is the murderer, an arrest cannot be made with the numerous other confessions in play. The men continue to provide their own reasons for murdering Beau, each motivated by the desire to gain retribution for the atrocities committed against them. Having effectively hit a dead end in the investigation, the Sheriff and everyone present are forced to sit and wait for the impending arrival of Fix Boutan and his lynch mob.

The news of Beau’s death reaches the ears of his brother Gil, a star player for Louisiana State University’s football team. Due to Gil’s anger over the killing,, Cal, a black teammate of Gil’s who has been instrumental to his success, is now shunned by his white friend: the second half of the media-dubbed football power duo known as “Salt and Pepper.” The situation at the plantation serves to further lower Gil’s spirits, and he eventually makes his way back home, where his father Fix is waiting with others. Despite the resentment growing in the house among Fix and his blood-thirsty friends and associates, Gil refuses to participate in any plans to promote violence, as he dreams of being selected as an All-American for his football accomplishments. He insists that lynching should be a thing of the past. Without the support of all of his sons, Fix reluctantly abandons his plot for revenge and remains home. A local by the name of Luke Will does not accept this unwillingness to act and raises his own group to carry out the planned lynching. The group decides to make a stop at bar before they carry out their aims.

Once word reaches the plantation that Fix has backed down, Mathu agrees to cooperate and peacefully go with Sheriff Mapes to the jailhouse. Charlie returns before they depart and confesses that he murdered Beau because the man had threatened him. Charlie admits to having asked Mathu to take the fall for him while he tried to escape. After hiding in the swamps all day, Charlie claims he felt compelled as a man to return and take responsibility for the crime he committed.

Before the Sheriff can take Charlie to jail, Luke Will and his group appear and make a demand for Charlie’s life. After Sheriff Mapes refuses to comply, Luke Will puts a bullet in the Sheriff’s arm. The wounded officer remains down in the front of the house while a shootout ensues between the old men and the white mob. Luke Will and Charlie engage in a firefight , and Charlie eventually shoots Luke Will before he himself is gunned down. After his death, members of the community pay tribute to Charlie by touching his body.

The week following the shootout, a trial is held for everyone involved in the incident, and all are given five years of probation. Mathu and friends ride off at the close of the trial, while Candy and Lou, locked hand in hand, remain on the steps of the courthouse to close out the novel.