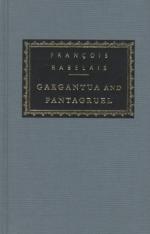 François Guizot
This Study Guide consists of approximately 60 pages of chapter summaries, quotes, character analysis, themes, and more - everything you need to sharpen your knowledge of Gargantua and Pantagruel.

This detailed literature summary also contains Topics for Discussion and a Free Quiz on Gargantua and Pantagruel by François Guizot.

Gargantua and Pantagruel by Francois Rabelais is a collection of five novels describing the life and adventures of the giant Pantagruel. The first book describes his education, the second relates the early life of his father, and the remaining three books follow his adventures while trying to determine whether or not his friend, Panurge, should marry. Gargantua and Pantagruel is an entertaining and comical satire of many aspects of education, religion and life in general.

In the first book, Pantagruel is so large that his birth causes his mother's death, and after the passing of his early childhood, his father Gargantua sends him to study. After visiting several schools of medicine and law, Pantagruel settles in Paris to pursue his studies. This is where he meets Panurge, who becomes his close friend. Pantagruel proves his wisdom and gains a respectable reputation while residing in Paris, but his father summons him home when the Dipsodians invade the city of the Amaurots at the behest of their king, Anarch. Once he defeats the Dipsodians, Pantagruel conquers the entire land of Dipsody. Pantagrueline Prognostication serves as an almanac filled with obvious advice, such as the blind will not see in 1533.

Gargantua, the second book, focuses on the childhood and education of Gargantua, Pantagruel's father. The old-fashioned education of Gargantua's early childhood makes him into a crazed fool, so his father, Grandgousier, sends him to Paris with Ponocrates as his tutor; however, though his education begins to improve, Gargantua is summoned home when King Picrochole of Lerne declares war against Utopia due to a dispute between the bakers of Lerne and the shepherds of Utopia. With the help of Frere Jean, a monk, and many other men, Gargantua defeats Picrochole, and to reward Frere Jean for his courageous feats during the war, Gargantua establishes the Abbey of the Thelemites. The Judgment on the Leap Year assures readers that there is no need to fear the leap year as it was established by man and not found in nature.

In the Third Book of Pantagruel, Panurge tells Pantagruel of his desire to marry and asks his friend's advice as to whether or not he should take a wife. Pantagruel suggests many means of deciding the answer to this query, but when his interpretations consistently state that Panurge will be cuckolded in his marriage, Panurge accuses his friend of intentionally interpreting every sign negatively. Since Panurge still has not come to a conclusion, Pantagruel suggests a journey to consult La Dive Bouteille to determine whether or not Panurge should marry.

Pantagruel and his men set sail in the Fourth Book of Pantagruel, making many stops on the way to their destination. During the journey, they encounter a ship filled with merchants, and Panurge tricks them all into jumping from the ship to their deaths at sea after arguing with Dindenault. Panurge also displays his cowardice by hiding and crying when their ship is caught in a great storm. After a nearly violent encounter with the Chidlings, Pantagruel's crew stops at the Island of the Papimanes, where they are treated hospitably since they have met the Pope.

In the Fifth Book of Pantagruel, the men learn about the various birds on the Ringing Island and are forced to bribe Catty-claws when they are arrested on the Isle of Wizket-Gate. After being assisted from running aground by vassals from Quintessence, Pantagruel and his crew visit her kingdom, Entelechy, where they are entertained by a ball staged in the form of a tournament. In Lanternland, they are permitted to choose an outstanding Lantern as their guide, and she leads them to the island where the oracle of La Bouteille resides. Inside the temple, the men marvel at the remarkable decor, but when Panurge is taken to La Dive Bouteille, she says only one word, "Trinck". The high-priestess Bacbuc explains that it means to drink and forces Panurge to swallow a silver book, which causes him to rhyme zealously in favor of marriage. Bacbuc bids the men go in the name of God, and so ends the adventures of Pantagruel.

More summaries and resources for teaching or studying Gargantua and Pantagruel.