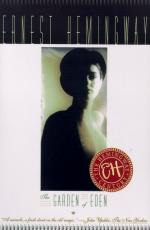 Ernest Hemingway
This Study Guide consists of approximately 50 pages of chapter summaries, quotes, character analysis, themes, and more - everything you need to sharpen your knowledge of The Garden of Eden.

The Garden of Eden Summary & Study Guide includes comprehensive information and analysis to help you understand the book. This study guide contains the following sections:

This detailed literature summary also contains Related Titles and a Free Quiz on The Garden of Eden by Ernest Hemingway.

David and Catherine Bourne are on an extended European honeymoon, traveling freely long the Mediterranean coast of France and into Spain. The idyllic vacation is interrupted first by Catherine's sexual role-playing. David cooperates, although it makes him uncomfortable. When Catherine picks up a girl in Cannes, she makes it clear that she expects both of them to make love to the new girl. At Catherine's instigation, David has sex with Marita, although it makes him feel disloyal. Soon, Catherine has designated women as a "wife of the day," and David is alternating between them at Catherine's behest. Catherine and Marita continue to have romantic interludes of their own, and all three swim nude together daily.

David, a successful novelist, begins writing in the mornings, creating a long narrative about the couple's honeymoon. Catherine continues to make demands, insisting that she and David have their hair cut and bleached into identical styles. When Marita joins them, David interrupts the narrative and begins writing a series of short stories about his native Africa. Catherine interprets this interruption in "their" narrative as disloyalty. As they all begin to consume larger and larger quantities of alcohol earlier and earlier in the day, Catherine becomes verbally abusive. Meanwhile, Marita is almost superhumanly understanding and supportive of David's writing. Despite the chaos of his personal life, the African short stories are the finest work David has ever created.

In an act of amazing brutality and betrayal, Catherine burns the African short stories, demanding that David work only on their "joint" project, the novel. Almost unable to absorb the blow, David turns to Marita for support. Catherine goes off to Paris to attend to the publishing details for "their" novel, and Marita helps David to recover from the betrayal. With Marita's support, David is able to start recreating the African stories, better than before.

Although the novel was begun in 1941 and Hemingway continued to work on it until his death in 1961, it was not published until 25 years later, partly due to the sexual content. Hemingway captures the flavor of an uncrowded and idyllic French Mediterranean, and he makes important statements about the nature of art and of love.

More summaries and resources for teaching or studying The Garden of Eden.

The Garden of Eden from BookRags. (c)2022 BookRags, Inc. All rights reserved.