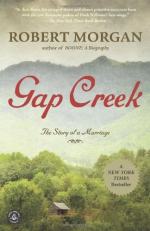 Robert Morgan
This Study Guide consists of approximately 42 pages of chapter summaries, quotes, character analysis, themes, and more - everything you need to sharpen your knowledge of Gap Creek.

Gap Creek is the story of a young couple's first year of marriage struggling against harsh terrain and poverty in the 19th century South Carolina countryside.

Ever since she was a child, Julie Harmon's life has been plagued with tragedy. She grew up in a hardworking farm family. She is the third daughter in a family of five children. The youngest child, a boy named Masenier, died when Julie was a teenager. Since her father was battling chest consumption and was too weak to carry the sick boy down the mountain himself, Julie helped with the journey and was present when her brother passed away after vomiting up a stomach full of worms. Unfortunately, Papa's consumption got the better of him soon after his son's death and he became bedridden. Just as Julie was the only one physically strong enough to tackle Papa's fieldwork, she was also the only one strong enough to deal with the emotional trauma of caring for Papa as he died.

After Papa dies, the majority of the hard labor falls on Julie who has the strength to work "like a man." At the novel's opening, she is seventeen-years-old, working hard in the fields and fearing that married life will never come her way. Out of the blue, eighteen-year-old Hank Richards stops by to ask for directions and he and Julie fall in love. After their first time courting - he meets with Julie's family for church on a Sunday afternoon - he and Julie are engaged. A month later, they are married and Julie's dreams of moving away from her mother's house come true. She and Hank move down into the valley to a place called Gap Creek where Hank's arranged free room and board in exchange for tending to an old man's home. The old man, Mr. Pendergast, turns out to be a terrible landlord, always meddling in the married couple's business and critiquing everything Julie does, from the way she cooks biscuits to the way she sweeps the floor. Additionally, Hank's mother, Ma Richards, comes down from her side of the mountain and she's just as miserable as Mr. Pendergast. Julie wonders if she's strong enough to deal with demanding, negative personalities.

After slaughtering a hog one afternoon and rendering the fat into lard, Pendergast sees that a fire has broken out in his kitchen. Even though it isn't safe, Pendergast runs back into the house to save his pension money and is badly burned in the fire. Although Julie does her best to nurse him, he dies from his injuries that night. With the landlord dead and with no way of reaching his heirs, Julie and Hank take over Gap Creek as if it's their own home. They fix it up, tend to the crops, feed the animals, and care for the property. Twice, swindlers come into town and steal from the couple, leaving them destitute. A freak flash flood kills the cow, ruins their corn crop, and rots most of the meat in the smokehouse. Hank and Julie are suddenly without any money or food. Around this time, Julie also discovers that she's pregnant. Despite their many hurdles, the couple joins together to fight back and reclaim their lives. They manage to eke out enough meals of cornbread and grits to live through the harsh winter, but barely. Julie gives birth to her baby, a daughter, a month early, but the baby is too weak to survive. Soon after, Pendergast's heirs arrive to reclaim their property and the back rent Hank owes. With no money, no food, and no future on Gap Creek, Hank and Julie pack up their few belongings and start climbing the mountain. Even though they have lost everything, the young couple feels overwhelmed with hope as they begin their new lives together.

More summaries and resources for teaching or studying Gap Creek.