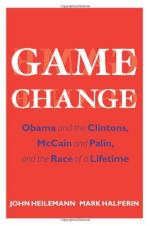 Game Change: Obama and the Clintons, McCain and Palin, and the Race of a Lifetime Summary & Study Guide

Game Change: Obama and the Clintons, McCain and Palin, and the Race of a Lifetime Summary & Study Guide Description

Game Change: Obama and the Clintons, McCain and Palin, and the Race of a Lifetime Summary & Study Guide includes comprehensive information and analysis to help you understand the book. This study guide contains the following sections:

This detailed literature summary also contains Topics for Discussion on Game Change: Obama and the Clintons, McCain and Palin, and the Race of a Lifetime by John Heilemann.

"Game Change" by John Heilemann and Mark Halperin is the story of the 2007 US Presidential primary and general elections. In 2007, the George W. Bush Administration was winding down. The pundits gave the big advantage to whoever the Democratic presidential nominee would be. The country was suffering from Bush fatigue and the wars in the Middle East had lost support. The country was ready for a game change.

Hillary Clinton had wanted to be the US President when her husband Bill Clinton was President. She had thought of herself as a credible candidate and more of an ideologue than her husband who was known for triangulating issues for his own purposes. Hillary had been a US Senator for four years and had promised her constituents that she would serve her full six-year term. In 2004, she had two years to go before her term expired. She was tempted to run because Bush fatigue was already getting a grasp on the country. Her husband urged her to go for it but her daughter told her she should keep her word. She took her daughter's advice. Besides, Bush could be re-elected and then her chance would be over. No, 2004 was out and instead, 2008 would be her year.

In 2007, Illinois State Senator Barack Obama had been nominated as the Democratic candidate for the US Senate. Hillary was impressed with Obama and participated in a number of fund raisers for him. He was easily elected to the US Senate and he often sought out Hillary's advice and counsel. She thought he was an exciting new politico and admired his ability to connect with people. Her savvy husband, known as the best politician in the country, looked at Obama as a threat to Hillary's ambition.

Obama came to national attention when he was given the honor of making the keynote address at the 2004 Democratic Convention. He wowed the delegates and the viewing audience all over the nation. From that point on, Obama was a rock star and immediately there was presidential buzz. Even though Obama had relatively little experience by 2007, he felt he could beat out Hillary and John Edwards in the primary and go on to take the White House.

There was a year-long struggle between Obama and Hillary for the Democratic nomination. They battled through primary after primary. The polls would be up for Hillary one week and up for Obama the next. It was an acrimonious race with bitter invectives slung and received by both sides. There were game changers for each of their presidential campaigns. Some of these events were sought out while some that came their way unexpectedly. As history has already recorded, Barack Obama was victorious in the end and won the nomination.

One of the biggest game changers in the story was the selection by John McCain of Sarah Palin for his running mate as vice president. McCain was suffering in the polls. He was unhappy on the trail, cranky, and always complaining. He told friends he should have never sought the presidency. The campaign concluded that it needed something to shake things up. They needed a game changer that would reset the contest. Although Palin was not properly vetted, she was selected because she was a woman and would hopefully take female votes from Obama. Palin did shake things up quite a bit but not in all the ways McCain had hoped. In the end, she added to the decline of the campaign. McCain was as much to blame as Palin was. Palin was a "reckless" choice as Vice President Cheney concluded.

Obama won the presidency by a landslide. Although Hillary was a bitter enemy during the primary contest, Obama grew to admire Hillary's strength, decisiveness, and knowledge of foreign and domestic affairs. He offered her the position of Secretary of State. She tried to reject it since she was exhausted and had so many other things to do. But Obama would not take no for an answer. He told her that her country needed her. Hillary found it impossible to say no to her country.

Game Change: Obama and the Clintons, McCain and Palin, and the Race of a Lifetime from BookRags. (c)2022 BookRags, Inc. All rights reserved.