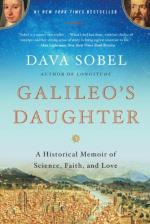 This detailed literature summary also contains Topics for Discussion and a Free Quiz on Galileo's Daughter: A Historical Memoir of Science, Faith, and Love by Dava Sobel.

GALILEO'S DAUGHTER by Dava Sobel begins with a letter written on May 10, 1623 from Suor Maria Celeste to her father, Galileo. Sobel reveals that this first letter is one of the 124 letters that survived both father and daughter. It is a mystery as to what happened to Galileo's letters to Maria Celeste. For many years, experts and theorists assumed that Galileo's letters were being kept locked in the Vatican library, a vast collection that is only accessible to members of the Vatican and, with permission, certain academics. This is untrue.

Virginia Galilei was the eldest daughter of Galileo and Marina Gamba of Venice, born on August 13, 1600. Because Virginia was illegitimate, she was considered to be "unmarriageable." Shortly after Virginia's 13th birthday, Galileo put the girl in the Convent of San Matteo in Arcetri, where Virginia, know known as Suor Maria Celeste, would spend the rest of her life in seclusion in poverty.

Sobel briefly recounts Galileo's tenure at both the Universities of Pisa and Padua. In 1609, Galileo performed one of his first experiments with a telescope in his garden at Padua. Galileo's studies, which consisted of confirming the theories of Nicolaus Copernicus, opened new found worlds and were eventually responsible for his obtaining an appointment as the chief mathematician and philosopher to the Grand Duke of Tuscany in 1610. However, the study of the heavens was not without trouble. In 1616 the Pope and a Cardinal Inquisitor admonished Galileo and warned him to curtail his efforts regarding heavenly bodies as the discourses bordered on heresy.

One of Galileo's first famed experiments took place atop the Leaning Tower of Pisa. The experiment was intended to disprove Aristotle's theory that two items dropped from a great height would hit the ground at different times if they were different weights. Galileo intended to prove that the theory was untrue.

Galileo's first significant invention was the geometric and military compass. Shortly thereafter, Galileo procured a position as a math tutor for Cosimo Medici, son of the Grand Duke Ferdinando I. Cosimo and Galileo would develop a strong friendship that would last throughout their lifetimes.

Although Galileo was a mentor in the Medici court, he continued to teach at Padua and also continued his experiments. It was at that time that Galileo created the first telescope. Eventually, Galileo would share his invention with many people across Italy so that they, too, would experience the same wonder in the heavens. Galileo also traveled to Rome, where he shared his discoveries with various academics and members of royalty. Galileo was especially honored when he was invited to join the Lyncean Academy, a prestigious academic group of philosophers and the world's first scientific society.

Galileo began to prove various theories, much to the dismay of their supporters. As a result, Galileo gained fame and prestige as well as derision.

The battle began between scientists and religious figures. Galileo continued to study and refine scientific theories, first postulated by Copernicus. It was feared by many that the holy fathers would ban Copernicus, and therefore the development of Galileo's telescope and other works would be in danger. In 1633, Galileo was tried at the Holy Office of Inquisition, a separate entity from the Catholic Church.

Galileo was forced to rework the controversial book, DIALOGUE OF THE TIDES and to never teach again. The following year, Maria Celeste died at the Convent of San Matteo. Galileo followed eight years later.