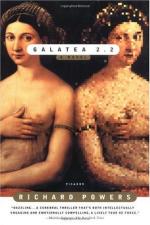 Center for the Study of Advanced Sciences

Richard is hired to work at the center as a visiting humanist. This is the location where he meets Lentz and does all of his work with Helen.

The town where Richard goes to school and meets C. This is also the site of the Center where he works with Helen.

The final iteration of the neural net created by Lentz and Richard to compete against a grad student on a literature exam.

The place at the university where Richard first tells C. about his father's death.

The city where C. grows up and the location for some of Richard's early books.

Richard has another office in this building and he sometimes wanders its halls. This is the building that Taylor has his office in and that he teaches C. in.