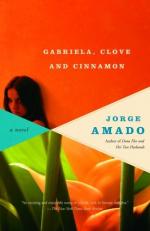 Jorge Amado
This Study Guide consists of approximately 47 pages of chapter summaries, quotes, character analysis, themes, and more - everything you need to sharpen your knowledge of Gabriela, Clove and Cinnamon.

This detailed literature summary also contains Topics for Discussion and a Free Quiz on Gabriela, Clove and Cinnamon by Jorge Amado.

Gabriela, Clove and Cinnamon is a romantic tale set in the small Brazilian town of Ilhéus during the 1920's. Due to a record cacao crop, Ilhéus is thriving and enjoying great progress, but many townspeople are still bent on observing old traditions, including violent political takeovers and vengeance against unfaithful women. The romance between Nacib Saad and his new cook, Gabriela, challenges the rules of Ilhéus society and inadvertently changes them forever.

Gabriela, Clove and Cinnamon introduces readers to a community on the verge of sweeping change. Ilhéus is a charming town filled with diverse personalities. The cacao plantation owners (called "colonels,") wield the majority of the political power in the region, but a newcomer, Mundinho Falcão, has recently moved to Ilhéus from Rio and is preparing to seize power from the colonels. The town patriarch, Colonel Ramiro Bastos, disapproves of the outsider's interference and vows not to surrender without a fight, even as Mundinho and his followers threaten to seize control from Ramiro and his men during the upcoming election.

Nacib Saad, also known as Nacib the Arab or Turk, owns the Vesuvius bar, a popular meeting place for prominent members of Ilhéus society. Although the town remains bitterly divided among political lines, Nacib vows to remain neutral and befriends members from both factions. When Nacib's longtime cook, Filomena, finally delivers on her threat to quit her job at Nacib's bar, Nacib must find a new cook fast. Nacib finds Gabriela, a migrant from the backlands.

Gabriela is a striking beauty, although Nacib does not realize this when he first hires her. Having traveled the dusty roads to Ilhéus in search of work, Gabriela is covered with dust and dirt when Nacib first sees her. After Nacib takes her to his home to cook and clean for him, Gabriela has a chance to clean herself up, and Nacib realizes how truly beautiful she is. The two become lovers almost immediately.

Gabriela and Nacib soon fall deeply in love, and despite reservations about marrying a woman without a pedigree, Nacib asks Gabriela to marry him. Gabriela does not understand why their relationship must change. She is content to cook and clean for Nacib during the day and sleep with him at night. Nacib, however, knows that other men are lusting over Gabriela, and fears the only way to keep her is to marry her. Gabriela is a brilliant cook, and business is prospering at Nacib's bar. Nacib marries Gabriela to keep from losing both his lover and his cook.

Once they marry, Gabriela realizes that Nacib expects her to accept the trappings of a traditional Ilhéus wife. She can no longer come and go as she pleases. She must pretend to enjoy things she hates, like dressing up in uncomfortable clothes and attending boring formal events. Gabriela becomes unhappy. She loves Nacib, but she grows restless for her old life.

Gabriela begins keeping secrets from Nacib until one day Nacib learns the truth about Gabriela's infidelity. His reaction to Gabriela's betrayal shakes up the entire town and changes the social norms for the residents of Ilhéus forever.

More summaries and resources for teaching or studying Gabriela, Clove and Cinnamon.