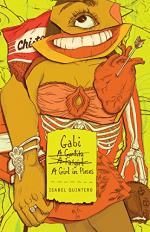 Gabi, a Girl in Pieces Summary & Study Guide includes comprehensive information and analysis to help you understand the book. This study guide contains the following sections:

This detailed literature summary also contains Quotes and a Free Quiz on Gabi, a Girl in Pieces by Quintero, Isabel.

The following version of the novel was used to create this study guide: Quintero, Isabel. Gabi, a Girl in Pieces. Cinco Puntos Press, October 14, 2014.

Gabi, a Girl in Pieces by Isabel Quintero tells the story of Mexican-American Gabriela “Gabi” Hernandez’s senior year in high school. In her diary, Gabi discusses timely issues like the discovery that her best friend, Cindy, is pregnant; her father’s addiction to meth; and her mother’s pregnancy. Gabi also addresses the double standard between teen boys and girls, as well as her own desires to break away from the accepted roles of Mexican women and attend college.

Gabi’s journal begins about a month before the beginning of her senior year in high school. She wishes the summer would last longer because she wants to be able to enjoy some more summer eating — like trying the new super hot wings at Pepe’s House of Wings — even though she knows she should lose some weight. Before school even starts, Cindy discovers that she is pregnant and Gabi’s best male friend, Sebastian, is kicked out of his parents’ house when he tells them that he is gay.

Once school is back in session, Gabi struggles to balance studying to get good grades and sending in college applications with her social life. Gabi is boy crazy nurses crushes on various boys in her class even though she doubts her qualifications as a girlfriend because she is overweight. Despite her weight, Gabi has her first dating relationship with Eric Ramirez, a boy in her Algebra class, and gets her first kiss.

As the year progresses, Gabi shares her concern about her father, a man who has been addicted to meth since she was in elementary school. He sometimes disappears for weeks at a time and Gabi fears he will be found dead. During the course of her senior year, Gabi’s father comes home, claiming he plans to get sober. Unfortunately, his plans do not include rehab so he is soon back on drugs. In the meantime, however, Gabi’s mother gets pregnant. Gabi wonders what impact the new baby will have on her college plans since it is generally expected for Mexican women to stay at home and help their family.

Gabi’s relationship with Eric does not last long. She realizes they have nothing in common except physical attraction and breaks up with him when she catches him kissing another girl. She begins dating Martin, a boy in her poetry class who understands Gabi’s love of poetry. The two bond through their love of writing. Gabi learns how poetry can be used as a way to connect generations of very different people and how it can be used as a form of therapy to express feelings of both grief and happiness.

In February, Gabi’s life is dramatically changes when she discovers her father dead of a drug overdose in the family’s garage. It takes the strength of Gabi’s friends and her family to encourage her to shake off her grief and rejoin life. Soon after, Cindy’s baby is born, a miracle that Gabi gets to watch. Gabi’s baby brother has also been born. Gabi thinks he is a reminder to her family that good things do happen.

Cindy reveals to Gabi that she did not have sex with German, the father of her baby, willingly; she was raped. Gabi is so angry with German that she cannot help but confront him the next time she sees him. She winds up straddling German and slapping him, an offense that gets her suspended from school for a week. Gabi also does not get to participate in graduation and fears she has ruined her friendship with Cindy. Cindy tells Gabi she had no right to try to get revenge on German for what he had done to Cindy but that she forgives her. Later, at a graduation party, surrounded by her friends and family, Gabi realizes that everything she has stressed about in life will work out.

Gabi, a Girl in Pieces from BookRags. (c)2022 BookRags, Inc. All rights reserved.