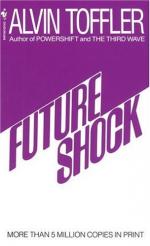 Alvin Toffler
This Study Guide consists of approximately 27 pages of chapter summaries, quotes, character analysis, themes, and more - everything you need to sharpen your knowledge of Future Shock.

Harvey Cox is a theologian who writes about the new urban man and how his relationships are characterized by fragmentation and modularization. Each relationship is defined in terms of limited contact. The relationship with the shoe salesman is based on the contact involved in the sale of shoes not on the total personality or lives of each. There is no total involvement or involvement that reaches further than the purchase of a pair of shoes. This is the kind of relationship that characterizes urban society. Cox feels that any attempts of urbanites to become further involved would lead to emotional emptiness and self-destruction. The urbanite has many superficial and impersonal relationships with only a few that involved deeper involvement.

Warren Bennis is a social psychologist and professor of industrial management who studied the changes that occur in organizations and bureaucracy. He predicted the end of...